Sinanoglou, Partitioning Palestine: British Policymaking at the End of Empire 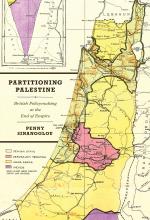 The concept of partition is one of the most fundamental of twentieth-century ideas: related, inevitably, to the rise of the territorial nationstate, the new international commitment to ethnic nationalism as an organizing principle of global politics, and the dissolution of large multinational empires into smaller and smaller national pieces with hardened and often militarized borders. In Partitioning Palestine, Penny Sinanoglou explores how the notion of partition manifested itself in one of its most (in)famous iterations: the division of Britishoccupied Palestine into physically segregated Arab and Jewish territories.

The subtitle of this book is an accurate expression of its scope: it is, above all, a consideration of the making of British imperial policy vis-à-vis Palestine in the period between the assumption of the Mandate and the 1948 war. It’s a subject that has received considerable scholarly attention—most recently in the pages of this journal, which published a twopart article by Laila Parsons in its most recent volume offering some preliminary conclusions regarding the contents of the recently declassified “secret testimony” to the Peel Commission in 1936–37. And indeed, it is a topic overdue for serious consideration. Who came up with the idea of partitioning Palestine? Why did its advocates see it as an attractive reformulation of the Mandatory state? When and how did it emerge as a serious response to what was rapidly becoming a political and military quagmire there? Sinanoglou and Parsons offer rather different answers to these crucial questions.

Partitioning Palestine begins with an overview of the peculiarities of the British position in Palestine as a colonial occupier with “mandatory” authority, and a kind of prehistory of imperial partition as it was imagined in other imperial territories, particularly Bengal and Ireland, in the first decades of the twentieth century. Here, Sinanoglou suggests that both a longer history of separating colonized subjects by ethnicity or religion and the more recent concern with calls for “self-determination” (both from denizens of occupied nations and, more disingenuously, from the League of Nations in Geneva) served to render partition imaginable as a response to ethnic conflict in colonized spaces. She goes on to trace early iterations of territorial separation for Arab and Jewish communities in Palestine, which made a turn in the first decades of occupation from “cantonization” proposals in the 1920s—visions for a kind of imperial federalism—to Zionist-derived conceptions of a more radical form of partition into distinct sovereign nations by the 1930s.

The meat of the book comes in its next two chapters, which trace the activities of the Peel Commission in 1936 and 1937 and analyze the resultant report that formally recommended the partition of Palestine into separate, ethnically determined enclaves. This is where Sinanoglou, working without access to the “secret testimony” documentation accessed by Parsons, comes to a rather different set of conclusions than her interlocutor. “A wide range of parties came before the commission in Jerusalem and vented, argued, praised and condemned the mandate, painted visions of the future, and decried injustices of the past,” Sinanoglou writes, adding, “This alone was unprecedented in the history of mandatory Palestine” (p. 105). The report, she argues, served to conceal differences of opinion both within and beyond British officialdom over “the definitions of Palestine, the Jewish national home, Arab nationalism, and British obligation under the Palestine mandate and the mandates system more broadly” (p. 127). In other words, for Sinanoglou, partition became a way of (theoretically, publicly) papering over the cracks between radically different visions of and for Palestine, while leaving space for the preservation of both British imperial and Zionist interests. For Parsons, the story is somewhat more straightforward: the private testimony suggests that the real decision for partition had little to do with Arab League, or even Zionist interests, but represented the efforts of a relatively low-level set of imperial bureaucrats engaging in internal realpolitik. The two works, considered together, thus open up an intriguing historiographical debate over the nature of the initial British support for the idea of partition and the reasons for its subsequent abandonment.

But, of course, there is also an important coda to this story: the reemergence of the idea of partition at the United Nations in 1947, after the British declaration of intent to withdraw from the Mandate. And here another vital question emerges; for as Sinanoglou convincingly argues in her final chapter, partition plans from the 1920s through the 1940s were marked above all by their fundamental impracticality. “Plans of the kind developed for Palestine speak to a blend of political pragmatism and political imagination,” she writes understatedly, “[but] certain of their essential components were so extreme or so clearly unworkable that it seems highly unlikely that the people proposing them thought them feasible” (p. 177). This is a crucial observation that gels with aspects of Parsons’s account of the internal rationale for partition as a form of imperial divestment from the morass in Palestine; perhaps the basic implausibility of such plans didn’t really matter since, as Parsons writes, “it was time for Britain to move on.”* In the end, then, it seems that Sinanoglou and Parsons are—indirectly, and from rather different angles—pointing toward the same conclusion: that those who mattered politically knew, at some level, that the production of elaborate plans for partition was mere window dressing, and that the process of divvying up Palestine would finally be accomplished not by committee but by war.

Laura Robson is the Oliver-McCourtney Professor of History at the Pennsylvania State University.