Marwan Rechmaoui – Remains of a City and a Memory

Out of wax, steel, aluminum, cement, and rubble, and from our remains and the remains of cities, Marwan Rechmaoui’s art attempts to reclaim the memory of the city.  The memories of a city can only be recovered from its political, economic, cultural, and social events, from the conduct of its merchants, theatres, newspapers, buildings, and from its architectural heritage.  Yet Rechmaoui insists on recovering it from the residue of one of the largest explosions of the past century.  He recovers it from the ruins of the grueling war in our midst, which continues to claim portions of the architectural history of our Levantine cities.  He even recovers it from the walls of the refurbished gallery hosting his exhibition.  He gathers the rubble and reconfigures it to remind us that a “nuclear” explosion has just occurred. 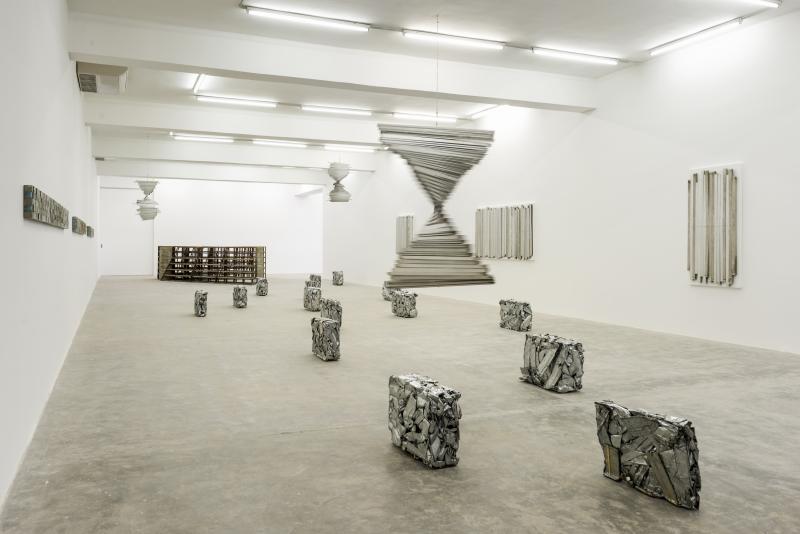 Marwan Rechmaoui, But the trees kept voting for the axe, 2021 Exhibition view Courtesy of the artist and Sfeir-Semler Gallery Beirut/Hamburg

Rechmaoui reaps memories from the habits of the merchants of Beirut, by demarcating the souks according to the kind of goods sold and their dimensions.  He reminds us of the old souks of Beirut that were destroyed by the civil war in 1975, and of their displacement to the Raouche quarter, and of our subsequent acclimation to their erasure during the invasion of 1982.  He recovers memories from the grains of wheat decimated by the great explosion of 2020.  He extracts them from the map of Beirut and its wide uncharted sea. 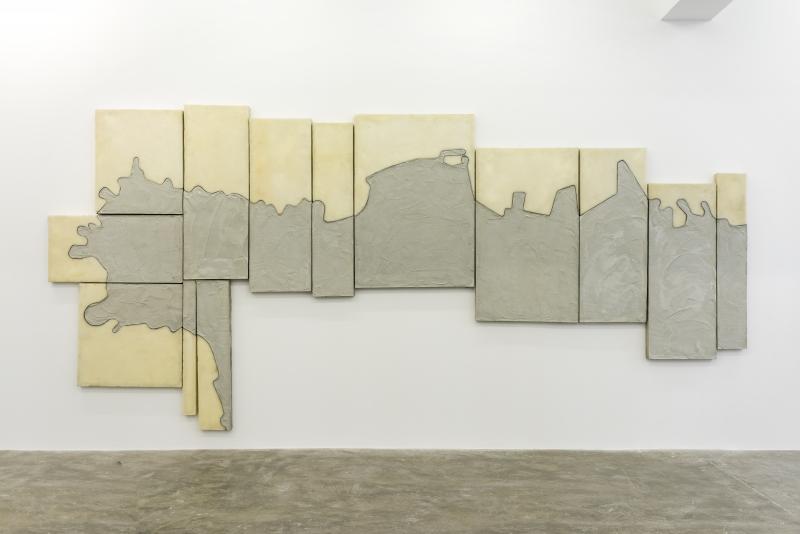 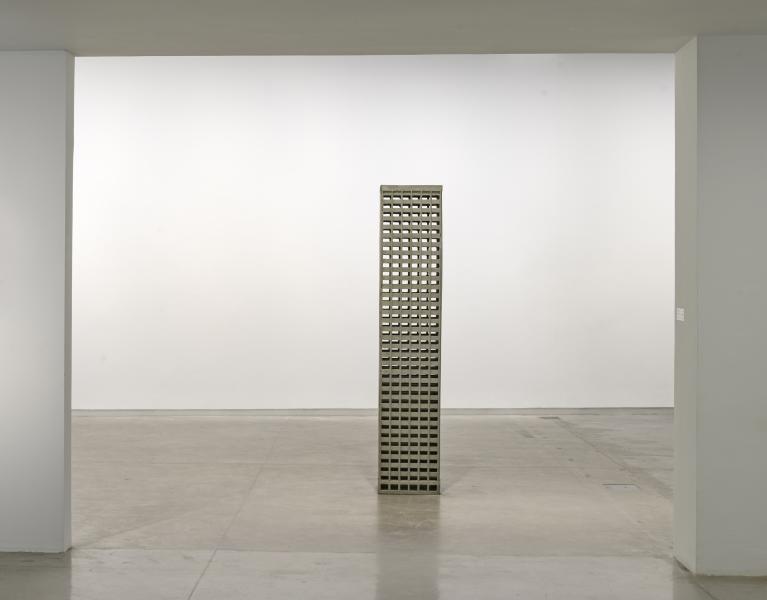 It may be reasonable to suppose that wars have their own architectural style, newspapers, economy, culture, and political life, as well as their own art.  That is what this artist is attempting to show, and he may seem pessimistic — though he insists that he is not — in drawing attention to the sheer scale of devastation surrounding us in Beirut, as in Homs, Aleppo, and al-Qusayr, and to the destruction that is never far from Khan Yunis, Gaza, the Jenin refugee camp, and the old city of Nablus, as well as from Tripoli, Sa’da, and Aden.  He conveys the magnitude of this destruction in the exhibition, “But the trees kept voting for the axe,” which opened on April 15, 2021 at the Sfeir-Semler Gallery in the Karantina neigborhood of Beirut.

Once again, Rechmaoui has penetrated our memory, having animated, infiltrated, and rummaged through it on other occasions, as when he built a model of the Murr Tower in Beirut (2000), which bore testimony to destruction and mutilation, and served as a reminder of the architectural massacres that continue to afflict our cities.  He also animated, penetrated, and rummaged through our memory when he created maps of the Palestinian camps, as imagined and drawn by the schoolchildren of Rashidiyeh, Burj al-Shamali, the Shabriha gathering, Ayn al-Hilweh, Shatila, and Nahr al-Barid, with their representations of the constricted spaces of the camp.  Most of those children had likely never ventured beyond the boundaries of the camps.  For them, the camp’s corner shops and poor neighborhoods represent the limits of their horizons.  He reproduces these neighborhoods in cement and in children’s drawings, opening a new horizon for them, and relating their stories to the world. 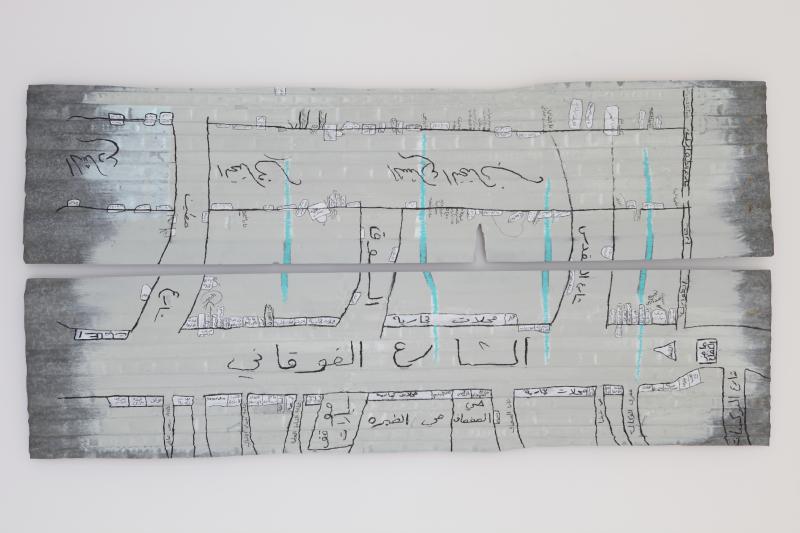 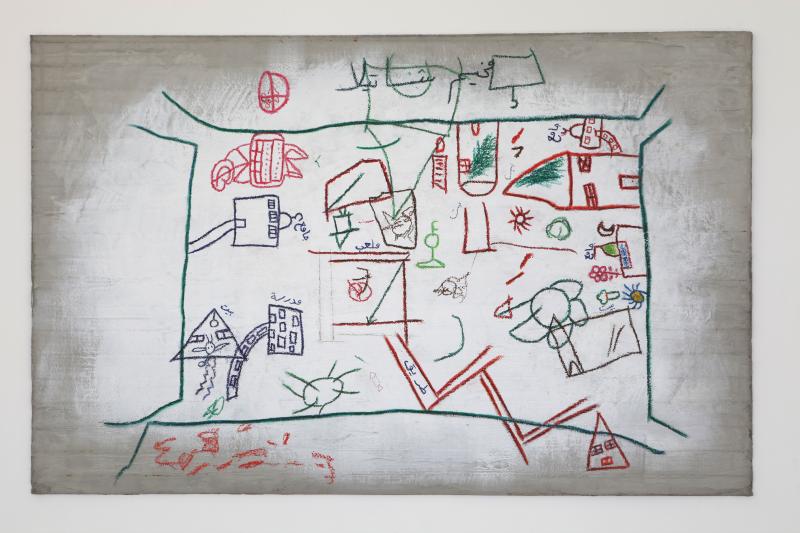 In the past, Rechmaoui also animated our memory, infiltrated it, and revived it with his map of Mandate Palestine (2018), which he drew on wood, representing its hills, valleys, mountains, deserts, and seashores, as well its transportation routes, in the context of a broader project of Visualizing Palestine.

I don’t know if Rechmaoui is trying to provoke our minds and memories by evoking cities, camps, markets, seashores, and spaces that don’t belong to the distant past but to our short-term memories.  Not enough time has passed for us to plead forgetfulness.  We’re not talking about cities destroyed by the two world wars, or about St Petersburg, Berlin, or Paris, which are distant in time if not space, but about Beirut and Homs.  Rechmaoui conveys the remains of cities whose rubble we still inhabit and grueling conflicts that continue to reverberate around us.  He calls to mind an explosion that has shattered a city and nearly erased its landmarks, or rather, has actually done so.  The event of the explosion will become a future memory.  He conjures up a refugee camp that still stands and those who think that the camp is destiny.  He redraws the original map of Palestine, whose landmarks haven’t changed, but whose interior has changed, including its architecture, people, and markets.  He relates all this from a place that is not far from the site of the explosion itself.  Thanks to Marwan Rechmaoui, we have returned to where we ought to be. 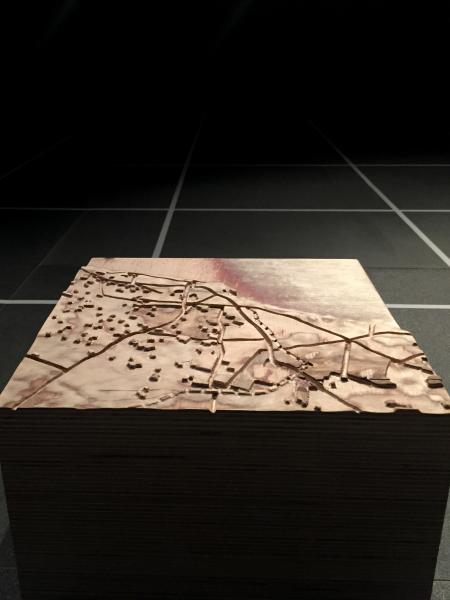 Khaled Farraj is the Director General of the Institute for Palestine Studies and a long-time editor at Majallat al-Dirasat al-Filastiniyya, the sister publication of the Journal of Palestine Studies.