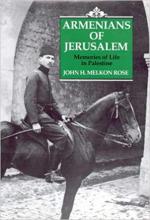 It would be difficult to find a more charming, readable book on the recent history of Jerusalem than John Melkon Rose‘s memoir of life in Palestine. Armenians of Jerusalem deals ostensibly with the Armenian community; Rose, however, also captures the complexity and diversity of the city not only through detailing his Armenian family history, but also through exploring his own experiences of living through the good times and bad to which the city has been witness and victim.

Rose grew up in British Mandate Jerusalem to an Armenian mother and a British father who came to Palestine with General Allenby. A friend described Rose once as "European with an oriental flourish," and Rose writes that "from a very early age, while scarcely aware of it, I grew up deeply rooted in two different cultures" (p. 1). Through his observations and experiences we come to understand multiculturalism as people lived it (before it became a subject of academic study), and we also feel the grip of colonial mentalities and practices. Rose was neither a politician nor a significant player in the Palestinian struggle, and therefore his attention to details of life in Jerusalem provides us with a refreshingly human, delightful, and at times painful portrait of the city that he deeply loved.

The first third of the book traces the lives of his Armenian ancestors in Jerusalem. Using family documents, stories, and church archives, Rose follows generations of the Krikorian, Melkonian, and Gazmararian families through the nineteenth and twentieth centuries as part of the large kaghakatsi community, the indigenous Armenian Jerusalemites. Rose‘s mother and aunt served as nurses in Ottoman hospitals (both civilian and military) in Syria and Palestine during World War I, some of the few women nurses during this time, and also some of the few Jerusalemite women who traveled alone away from their families. His engaging way of telling their stories makes the suffering and poignancy of this period of history very real. During Ottoman rule, the Armenians as Christians had access to missionary education, providing them with knowledge of languages; combined with greater social freedoms, the women were able to work outside the home as nurses or for missionary families as laundresses, seamstresses, and governesses. However, the missionary presence also facilitated their de-Armenianization. For example, Rose‘s mother and aunt were educated in a German boarding school and thus excelled in German and Arabic, but did not speak Armenian. Emigration of Armenians from Jerusalem followed the Israeli occupations of Jerusalem in 1948 and 1967 due to property confiscations, loss of businesses and ways of life, and loss of freedoms. Rose sadly notes that with his aunt‘s death in 1989, "the line of an ancient kaghakatsi family in Jerusalem has ended. There are no more Krikorians or Melkonians left, and only one aged member of the Gazmararian family still lives in the Armenian Quarter. The kaghakatsi have now been reduced to 300 souls" (p. 275).

The second third of the book deals with life during the British Mandate period, to which Rose was a direct witness. Born in 1924, as a boy he studied with other British children at the British section of the Jerusalem Girls College, but was excluded from certain circles and events because of his "foreign" mother. At age nine he was sent to board at St. George‘s College on Nablus Road in Jerusalem. He spent summers in Ramallah with his aunt and her Palestinian in-laws and thus is able to show us some of the contrasts between city life in the modern suburbs of Jerusalem (he was raised in a villa in the Greek Colony) and the village life in Ramallah. Spending most of his childhood and early adult life with his mother and aunts, the book focuses on the lives of these women. Rose‘s tangible descriptions of cooking and food preparation, household life, and social norms enlighten readers about practices that are beginning to become a way of the past. "Tin-plated copper pots, tanajer, or qidar (clay fired pots) were used for cooking. Food was never kept in copper pots overnight for fear of poisoning. Periodically the pots had to be re-plated or ‘whitened‘ by the imbayed, the tinsmith—a hot and dirty job. … Many Armenians who came to Jerusalem after the Turkish massacres had been tinsmiths in their country, since the raw material for whitening copper pots was mined in the mountains of Armenia" (p. 125).

Rose writes with a rare, steady compassion, combined with the detachment of an observer: "During our childhood many vendors and travelling craftsmen came round to the house offering their services. … Our kitchen knives and garden implements were sharpened by a fierce and handsome Afghan who called twice a year. … Blocks of ice from a factory in the Katamon were delivered daily in a grey-painted horse-drawn covered cart. … One often wonders how these people made a living, as they usually had large families to fend for and they earned very little. What counted to them was that they should be mastoureen (maintaining dignity) in the eyes of friends and relatives. Amassing riches was out of the question: one of their sayings was bidna in ‘eesh (all we want is to be able to survive). Unfortunately even this dignity was to be denied to them, as thousands had to abandon their homes and villages in the face of the wars which were to plague their country" (pp. 110-113).

We benefit from Rose‘s sharp eye and his interests in flowers and gardening, birds, food, and walking. Anyone who has ever seen the Palestinian countryside in the springtime will relive their memories through Rose‘s vivid portrait of Jerusalem before it became the insular, slick, cement city that it is today. "Soon after the first rains the parched countryside is gradually transformed into a lush green meadow which early in the new year changes into a patchwork quilt of wild flowers. We had only to walk a short distance from the house [in the Greek Colony] to find the most lovely wild flowers growing in abundance among the rocks—sweetly scented winter crocus (Crocus hyemalis), scarlet anemones (Anemone coronaria) and pink cyclamen (Cyclamen persicum). … Through every crevice these lovely flowers found space to bloom, forming a haze of pink above their dark-green marbled leaves. … Gladioli, which usually grew in wheat fields, were described as danab el warwar or foxes‘ tails from the way they bobbed back and forth in the wind" (p. 108).

Rose was one of the few non-Jewish residents of the city to remain behind in West Jerusalem when it was occupied by the Israelis in 1948, and his chapters on their confinement in the Baq‘a Zone for a year and a half, and the family‘s experiences with looters, soldiers, and Israeli bureaucracy are unique. He is perhaps the only person who has put these experiences in print, and he lived and worked there until 1953 when he crossed the Mandelbaum gate to the Jordanian side. In the years following the 1948 war, while he still lived and worked in Israeli West Jerusalem, he writes that, "I found myself frequently going to the Greek Colony just to gaze and evoke fond memories. … To me the saddest part was the lack of familiar faces. I would wander through neighborhoods that I had known so intimately but which were now so strange: strange people enjoying themselves on the verandas of friends‘ houses where I had been a frequent visitor. It was as if I had been in the underworld for a long time, had come back and was desperately trying to recapture a past that had been good and lovely. I strongly felt that injustice had been meted out to a community of innocent people, and I was aware of their suffering which I found impossible to ignore. Why I inflicted such pain on myself I do not know, but pain it was" (pp. 219-220). The third section of the book deals with this period as well as his post-1953 tenure at St. George‘s College in East Jerusalem, where he was warden from 1957 to 1974, when he moved to England.

Rose‘s keen attention to social norms helps us understand class and gender divisions during this period. Told with humor and compassion, his stories and descriptions open up for the reader the everyday life of the city. "There were many Arab butchers inside the Old City, but to westerners they seemed primitive. The sight of carcasses hanging in rows appalled them, there were no ‘cuts‘ and it was usual to buy a leg of mutton or lamb or a piece of beef. Men always went shopping for meat and Arab women were discouraged from doing so. Translated into Arabic a leg of lamb is a fakhdeh, which strictly speaking means ‘thigh‘. It was beneath a woman‘s dignity to mention such a word as ‘thigh‘ in front of a butcher; besides which there was fear that it could lead to undesirable conversation. With the passage of time this rule no longer applies" (p. 107).

Armenians of Jerusalem is the ideal book for people who know little about the city or about Palestine. He gives background to the events that create historical moments, and his style of writing is pleasant and easy to read. At the same time, the book provides important perspectives and information for the specialist through his descriptions of life in the city and his social commentary. On occasion he does overly simplify (such as writing that the British Mandate started in 1918, while in reality Palestine was under the Occupied Enemy Territory Administration until 1920 when the Mandate started), or incorrectly gives names (he writes sanduq al-‘ajam instead of sanduq al-‘ajab), but the wealth of details he provides overcomes these occasional mistakes, which are perhaps due to his long absence from the city. Unfortunately, Rose died suddenly in 1995; however, this book remains a testimony to his love of the city and his interest in the lives and lifestyles of those who lived in it, creating nostalgia in the reader for the Jerusalem of Rose‘s memories and childhood and sharing with him or her the love and respect he had for its many diverse inhabitants.

Rochelle Davis is a doctoral candidate in Anthropology and Near Eastern Studies at the University of Michigan, U.S.A.