Toubbeh: Day of the Long Night 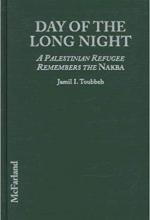 In his introduction, author Jamil Toubbeh proposes to focus on the human dimension of the tragedy and the "life, trials, and tribulations of Palestinian families before and following the establishment of the Jewish state in 1948" (p. 6). He suggests that this point of view is one heretofore unexplored by Palestinian and non-Palestinian writers and the media. The book consists largely of the personal recollections of experiences and events over the past sixty years, combined with his political analysis of the events that have shaped recent Palestinian history as well as U.S. Middle East policy.
Unfortunately, the political analysis dominates the majority of the book, severely restricting the pages devoted to the human dimension of the Palestinian story, despite the author's expressed desire to do otherwise. Day of the Long Night quickly becomes mired in rhetorical denunciations of the Zionist movement, British colonial policies, UN inactivity, and U.S. foreign policy. While the critiques offered are valid, most of them are not unique to those familiar with the Palestinian issue. The polemical style chosen by Toubbeh to present his political commentary overwhelms his carefully researched and well-documented work, whose informative value must be unearthed from among the political tirades. In some senses, he does a disservice to Palestinian history by making Palestinians out to be nothing but victims of various plots that were larger and more powerful than they. He thus denies them any hand in shaping and forming policies or events; in this narrative, they are reduced to reacting to others' visions and plans and have no agency or initiative of their own.
Ultimately, the author's personal story and insightful commentary make this book worth reading. His descriptions of life before 1948 and during the war (chapters 1, 3, 4, and 6) provide the reader with a compelling glimpse of life in Jerusalem. Through his family stories, Toubbeh cogently expresses the complexities of Arab Jerusalem society; of the educational systems; of social relations among Christians, Jews, and Muslims; and of life as a young man in the city. He keenly notes, as he describes the cosmopolitan life of Jerusalem Arabs, that "The Zionists would not have wanted the world to know that Palestinians were a structured, cultured, and intelligent community" (p. 20). Unlike many other authors on life in Palestine prior to 1948, Toubbeh brings a finely tuned critical eye to his subject. He makes apparent many of the contradictions of Jerusalem society at the time. Using his brother as an example, he points out that prestigious schools educated children in the Western classical and modern traditions; thus divorced from their Arab heritage, these young people were then abandoned to live the contradiction of having learned about English novels and the Enlightenment, while at the same time despising the colonial system that treated them as lesser beings.
Toubbeh moved to the United States in 1951 as a young man and describes what it was like to be a Palestinian and an Arab during the various Arab-Israeli wars (chapter 9) and the changes in U.S. policy during this period (chapters 10 and 12). An informative chapter on Toubbeh's experience working in the Native American Health Service allows him to draw a number of important and significant parallels between the histories of Palestinians and American Indians under U.S. and Israeli colonizing schemes. This reader wished that the author had written more on this subject. It is rare indeed, as the author points out, that a nonwhite, nongovernment official gains a position in the Bureau of Indian Affairs; as a Palestinian, his perspective undoubtedly differed from that of other administrators.
The book also contains a number of poems composed by the author and photos from his personal collection. They help the reader understand more fully the personal dimension of the tragedy of 1948, how it affected families and Palestinian senses of home, family, land, and place. Particularly through the poetry and Toubbeh's description of his family members and their histories following the diaspora of 1948, the tragedy of the political events becomes tangible. These parts of the book vividly illustrate the Palestinian attachments to Palestine and Jerusalem and their long history in these places; the stories communicate to the reader the injustices perpetrated against Palestinians much more successfully than does the author's political analysis.
Palestinian autobiographies of the twentieth century are being published in English with increasing frequency. These works complement a significant body of memoirs published in Arabic describing life in this same period. Toubbeh's Day of the Long Night adds an intelligent and critical work to this corpus.

-----------------------
Rochelle Davis is a doctoral candidate in the departments of anthropology and Arabic literature at the University of Michigan.