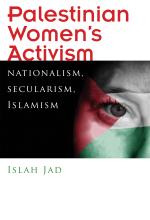 Islah Jad's newly published book, Palestinian Women's Activism: Nationalism, Secularism, Islamism, is the product of decades-long research on gender issues and women's political participation in Palestine. Though Jad—the founder and former director of the Institute of Women's Studies at Birzeit University—has authored countless articles about Palestinian and Arab women's political development and participation, this is her first book. Jad explores women's activism in Palestine against the backdrop of the historical and political landscape that affects the broader national struggle, with a focus on the activism of Islamist women. Jad's study investigates the often tense and contradictory relationship between gender and nationalism in Palestine, which is further complicated by the secular/Islamist divide between the Palestinian Authority (PA) in the West Bank and Hamas in Gaza. However, what Jad concludes is that in the case of Islamist politics, men and women conducted a significant amount of work to meld their movement's gender ideology with the nationalist struggle.

In chapter 1, Jad provides a rich historical overview of women's activism within the context of the broader nationalist movement from the time of the British Mandate of Palestine through the First Intifada. She shows us how as the national identity evolved, women created a space for themselves in the nationalist struggle, serving as both actors and symbols (p. 5). In chapter 2, Jad tackles women's activism after the Oslo Accords of 1993. During this time, women's organizing was taking place within the PA and various nongovernmental organizations. Jad argues that “women's activism is not a movement representing all women's interests, but rather a site of conflicting interests, power relations, and variable positionings” (p. 26). In post-Oslo Palestine, the PA and the growing number of NGOs were concerned with democratization, human rights, citizenship, and state building. However, Israeli occupation continued to exist, and the Palestinian state was being developed conditionally and under the shadow of the occupation, which meant that the Palestinian state never had true sovereignty. Women activists took up new projects related to women's rights, but those projects ignored the everyday concerns of women related to their basic needs. The work of these women was further alienating because activists were coming from a particular subset of society, and the Islamists accused these feminists of being elitist, secular, and Western.

According to Jad, the Islamists were able to gain mass support by exploiting the PA's failures to end Israeli occupation and protect the Palestinian people. The Islamists accused the PA and all those associated with it, including feminist activists, of losing sight of the Palestinian nationalist struggle and colluding with secular, Western elements. After the 2006 election in which Hamas won the majority of parliamentary seats, the conflict between the PA and Hamas grew stronger, and in 2007 the split divided the territories. Today, the PA governs the West Bank and Hamas governs Gaza. The split created new images of the “new woman” or the “model woman” that coexisted with one another. The Islamists portrayed her “as the veil-wearing caretaker of her husband and children, modest, patient, and pious, as in the past . . . she was the bearer of male children to be sacrificed in order to continue the resistance, in short, the woman as 'giver'” (p. 38). The feminist woman associated with the PA, the author explains, was “urban, professional, elegant, claiming her individual rights from the PA, society, and her family; in short, the woman as 'taker'” (pp. 38–39). Hamas emphasized this difference to distinguish Islamist women from the secular ones, particularly as the latter were presumed to be more concerned with individual issues than collective issues. A people under occupation could only benefit from mounting a collective resistance against such an occupation (p. 134).

Jad's book helps to fill a gap in the literature about Palestinian women's activism as it relates to Islamist women, who have been largely ignored by many feminists even though their activism constitutes a significant component of civil society (p. 71). Chapters 3, 4, 5, and the epilogue discuss women's participation and organizing in Islamist politics in Palestine. The former is based on Jad's field research primarily conducted between 2000 and 2004, and the latter focuses on women's political participation since 2004. Jad explains that today's activism by women, in particular Islamist ones, reflects the varying political, social, and religious circumstances experienced by those women. Ultimately, gender and nationalism are linked through a multitude of factors, and understanding these factors is key to understanding the gender agenda of a movement, Jad argues. Taking Hamas as a case study, she argues that the movement's “gender ideology cannot be separated from the colonial use of gender or the rivalry with other nationalist groups or, to a lesser extent, the scriptural text” (p. 128). In other words, Hamas's gender ideology and, by extension, women's activism and organizing was not stagnant, and changed consistently to reflect the lived conditions of Palestinian women. Hamas did what the PA failed to do, which was connect women's rights with the national and social needs of the Palestinians (p. 150). In order to bolster its base, Hamas worked to include women, and in turn, women activists “managed to change the prevailing gender vision to make a space for themselves” (p. 134).

In the epilogue, Jad focuses on the women's ministries in both the West Bank and Gaza to drive home her argument regarding the differences in activism and the significance of the activism conducted by Islamist women. She maintains that the West Bank ministry adopted a more theoretical than practical approach because it lacked funding and staffing and thus did not address the everyday concerns of women living under occupation (p. 177). Meanwhile, Hamas gave the Gaza women's ministry the funding and staffing required to create and implement policies that reflected the broader governmental policies, such as making Gaza's economy stronger by getting rid of Israel's stranglehold on the economy. The Gaza ministry's projects promoted food security and job creation for the younger generation, improved laws and policies concerning women, and provided women with much needed services to survive (p. 178).

Jad's book adds to a rich literature on women's activism in Palestine, shedding much-needed light on the activism of Islamist women, and opens doors for further research. Since the primary field research was conducted through 2004, I am left wondering how women activists in both the West Bank and Gaza—secular and Islamist—reflect on their work after the electoral victory of Hamas, the onset of the blockade against Gaza, two Israeli wars in Gaza, and widespread, continuing disenchantment with Palestinian politics across Palestine.