Beinart: The Crisis of Zionism 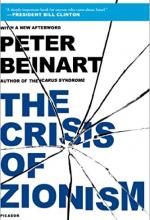 It would seem that after the publication of reams of liberal Zionist tracts arguing for a two-state solution to save Israel from itself, from Amos Oz’s Help Us To Divorce (Vintage, 2004) to Gershom Gorenberg’s The Unmaking of Israel (Harper Collins, 2011), another addition to the cottage industry would be seen as superfluous, and perhaps a little distasteful. But even with a title recalling Bernard Avishai’s 1985 liberal Zionist polemic, The Tragedy of Zionism (Helios Press, 2002), and a narrative partly inspired by the potted history featured in Gorenberg’s recently published book, Peter Beinart’s The Crisis of Zionism (Times Books, 2012) has managed to generate an avalanche of publicity, lending the impression that he had made a new and truly revelatory contribution to an already massive field of writing and research on Israel-Palestine.

In fact, the impact of The Crisis of Zionism derives not only from its content, but from the profile of its author, once the wunderkind of the Jewish establishment. Marty Peretz, the famously vituperative former owner of the New Republic, appointed Beinart at age twenty-eight to serve as senior editor of his magazine. During the run-up to the U.S. invasion of Iraq, Beinart emerged as one of the country’s leading liberal advocates of war, lashing out at the Democratic Party’s anti-war wing in a book entitled The Good Fight (Harper Perennial, 2008). Rewarded with generous honorariums to speak at the American Israel Public Affairs Committee (AIPAC)-sponsored events, Beinart joined his boss, Peretz, in signing a Project for a New American Century (PNAC) document calling for a “surge” of U.S. troops to Iraq. In 2006, after the war had exacted a terrible toll on both the U.S. military and Iraq’s civilian population, Beinart published a book length mea culpa called The Icarus Syndrome (Harper Perennial, 2011). Four years later, in a heatedly debated New York Review of Books essay blaming the Jewish establishment for turning young Jews off to Zionism, he took aim at his benefactors. Bracing and brutally personal, the essay became the basis for Beinart’s next book.

Beinart is right, of course, that the anti-Semitism obsessed fossils and Likudnik plutocrats who comprise the Jewish establishment threaten to repel all but the most rigid and resentful away from their cause. The problem is that Beinart shares their cause. Indeed, rather than issuing a bold call for delinking American Jewry from Israel, thereby relieving its communal leaders from defending a violent, sixty-five-year-long project to control and dispossess the Palestinians, Beinart impels his readers to save the 19th century blood and soil Zionist ideology for the next generation—to rescue it from its most zealous adherents. His call for reform requires him to bifurcate Zionism into two streams: the “good” Zionism of Tel Aviv liberals and Labor versus the “bad” Zionism practiced by Gush Emunim settlers and their political patron, Benjamin Netanyahu, whom he sees engaged in an unholy alliance with Hamas and “some on the far left” to destroy the Jewish state.

Like so many other liberal Zionist intellectuals, Beinart whitewashes the actual legacy of the Zionist left, presenting it as an aggrieved party in a crisis it had no role in creating. According to Beinart, following a well-worn narrative, Israel was well on its way to becoming a normal democracy until “the Six Day turned history’s trajectory upside down.” “Before this terrible rupture, it was possible to believe,” he writes, “that . . . the gap between Zionism and liberalism was narrowing, that Israel was moving in the direction of [Theodore] Herzl’s dream.” Perhaps it was possible for Beinart to believe such a thing, but other readers might have to take his words on faith.

While he alludes to the Zionist left’s role in the Nakba, Beinart avoids any mention of its role in establishing the groundwork of occupation. Most conspicuously, he omits the Allon Plan, the blueprint conceived by the kibbutzik and Israeli founding father Yigal Allon that laid the basis for the first line of Jewish settlements. It was Allon, the golden son of Labor Zionism, who personally blessed Rabbi Moshe Levinger’s settlement of Hebron, viewing the messianic, fanatically racist rabbi and his followers as heirs to the legacy of the early kibbutznikim who colonized Palestine at the turn of the century. “I never forgave the Israeli government under Ben Gurion for not letting us finish the job in ’48–’49, both militarily and politically,” said Allon, who oversaw the ethnic cleansing of Lydda and Ramle in 1948. To him and to the Labor Zionist establishment, the occupation of the West Bank and Gaza represented a seamless continuation of the settler-colonial enterprise that began in 1893. For Beinart to support his thesis, however, this history needed to be whitewashed.

Beinart’s footnotes and acknowledgements suggest a near-total neglect of Palestinian scholarship and testimonies. Indeed, his indifference to the narrative of Palestinians who experience Zionism not as an existential crisis of identity, but as a daily reality, is glaring. (The only Arab Beinart appears to have interviewed for the book is the Lebanese-American Beltway operative Hussein Ibish). Add to the equation Beinart’s dearth of reporting from inside Israel-Palestine, and it is easy to understand why he might claim “Arab Israelis” exist as equals in “a flawed but genuine democracy,” or why he believes those Palestinian citizens are free to condemn Israel’s exclusivist governing structure but “rarely see the inside of a prison cell.” And without any input from Palestinians inside Israel, Beinart confidently proclaims that, “within the green line the struggle to fulfill the democratic vision outlined at Israel’s birth has continued.”

To be sure, Beinart did not craft The Crisis of Zionism for an audience of Palestinians, or for those who reflexively sympathize with their plight. Beinart instead addresses the organized community of Jewish-Americans, especially those young Jews thrown into crisis by their struggle to reconcile their abiding devotion to the State of Israel with their commitment to liberal values. To ameliorate the crisis, Beinart urges Jewish-American power brokers to back a two-state solution in Israel-Palestine, though he spends little energy explaining how, at this terminal stage, such an arrangement could work. On the domestic front, Beinart argues for the creation of government-funded Jewish religious schools, citing unscientific data supposedly showing that graduates of such institutions have flocked to liberal Zionist organizations like J Street. Thus, Beinart makes the case for undermining church-state separation in the name of deepening young Jews’ “commitment to Israel,” and all the while posing as a liberal. It is hard to imagine that the young Jews Beinart aims to rescue from the crusty establishment would find yeshiva life particularly appealing, especially considering the hardline political attitudes that pervade the atmosphere of so many Jewish religious schools in North America.

Without citing Stephen Walt and John Mearsheimer’s best-selling, aggressively assailed book, The Israel Lobby (Farrar, Straus and Giroux, 2007), Beinart inadvertently validates its thesis, illustrating how, as a result of over-zealous lobbying by groups like AIPAC, “the Israeli-Palestinian conflict is bypassing Washington.” Many Americans who came to a similar conclusion have gravitated toward the Boycott, Divestment, and Sanctions (BDS) movement, an internationally based campaign organized around Palestinian civil society’s call for grassroots action to pressure Israel into honoring its commitments to international law. Beinart allows that BDS is “a shrewd tactic” that “gives activists frustrated by America’s unwillingness to pressure Israel a mechanism to do so themselves.” But he fervently rejects its objectives. In its place, he proposes “Zionist BDS,” a novel concept based on the limited boycott of settlement products and organizing protests of “partisans of nondemocratic Israel.”

Beinart’s call for a limited boycott provoked a typhoon of harrumphing denunciations from Jewish establishment groups, self-appointed discourse policemen like The Atlantic’s Jeffrey Goldberg, and even Israel’s PR-obsessed ambassador to the United States Michael Oren, who issued a statement accusing Beinart of aligning himself with a “marginal and highly radical fringe.” The indignation could have easily been predicted—offending Zionist sensibilities is not much of a feat these days—but they worked to Beinart’s advantage, consolidating the image he seemed to long for. According to Beinart’s narrative, Israeli and Jewish establishment leaders were “unwittingly conspiring” with Palestine solidarity activists to “destroy Israel as a democratic Jewish state.” And there he was, stuck in the middle, battered by both extremes, a rebel in the cause of moderation.

It is here, with Beinart’s call to liberal Zionist arms, that he reveals his ultimate agenda. He writes, “The challenge for Zionists who cherish Israeli democracy is to counter this erasing of the green line by reinforcing it: to delegitimize Israel’s occupation while legitimizing Israel itself [italics in original].” In other words, Beinart intends to agitate for a reformation of the ossified, reactionary Jewish-American establishment in order to isolate Palestinian grassroots activism, or those he contemptuously refers to as “some on the far left.” In the end, Beinart seems more concerned with streamlining the tone and tactics of the Jewish establishment than altering its concrete objectives. BDS must be decisively defeated, he suggests, before the crisis of Zionism is finally resolved.

Since the publication of The Crisis of Zionism, Beinart has neither actively supported any boycott action targeting settlement products nor has he organized a single protest against a “partisan of undemocratic Israel.” “Zionist BDS” appears to have been a rhetorical ploy, not a grassroots activist campaign that its intellectual author ever planned to wield against Israel’s occupation. Perhaps the only purpose the tactic can serve at this point is as a public relations tool against the Palestinian-led BDS movement, providing young pro-Israel advocates with symbolic moral cover while they defend the Jewish state’s exclusivist institutions in the face of mounting international pressure.

Well below the radar of the Jewish-American media and most pro-Israel activists, a sophisticated think tank with ties to Israel’s military-intelligence apparatus has been studying Beinart’s writings for strategic insight. Called the Reut Institute, the group produced an influential and unusually perceptive white paper in 2010 on combating the threat of “delegitimization.” While urging a full-frontal assault on Palestine solidarity activists, the paper also advised “driving a wedge between those who support BDS but are not committed to supporting full Palestinian rights and those who do.” Reut Institute National Security team leader Eran Shayson coined a novel term for those driving the wedge: “the Beinarts.”

[1] Max Blumenthal is an award-winning journalist and bestselling author of Republican Gomorrah: Inside the Movement that Shattered the Party (Nation Books, 2009). His next book, Goliath: Life and Loathing in Greater Israel, will be published by Nation Books in October 2013.