Tamari: Year of the Locus: A Soldier's Diary and the Erasure of the Palestine's Ottoman Past 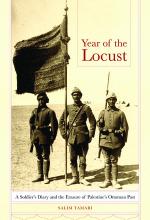 In 1915, Ihsan Turjman, then only a twenty-three-year-old conscript in the Ottoman army, landed a boring desk job in his hometown, Jerusalem. Able to avoid being sent to the front, he began writing his diary with an entry contemplating the fate of Palestine as World War I raged. The story of how this anonymous diary made it to English-language bookshelves almost a century later, under the diarist’s real name, is a credit to the careful sleuthing of Salim Tamari, who translated the diary and appended a long and invaluable introductory essay, illustrated with unique archival photographs. Though the introductory essay will benefit from closer copyediting in a subsequent printing, the value and significance of the volume to scholars and students of the late Ottoman period and early Palestinian national history is without question.

Reading Turjman’s diary brings both real pleasure and a dull ache. The reader’s pleasure derives from the voyeuristic peering into a young man’s innermost thoughts, and eavesdropping on his internal monologue. The writing is compelling and engaging, thanks to Tamari’s artful, smooth translation, which, along with his detailed introduction and notes, provides the context for the events that take place in the diary. Turjman wrote with passion about the futility of the war, his belief in humanity and the common man, his beloved Suraya, and the deeply felt trivialities of youth, such as the disappearance of tobacco due to the war or his delight in white leather shoes, despite the military regulations against them. The ache comes from Turjman’s vivid descriptions of how war ravaged the country and destroyed lives, both civilian and soldier. As you realize that his diary ends in 1916 and his life shortly thereafter, the ache for what might have been grows—the senseless loss of a creative, interesting, and modern young man. What might Turjman have become, as a person, as a Jerusalemite, and as a Palestinian?

Tamari’s introductory essay, entitled “The Erasure of Ottoman Palestine,” makes up the first half of the book. He examines the World War I diaries of three Ottoman soldiers, Turjman (a private), Lieutenant Aref Shehadeh (known as Aref al-Aref), and Mehmet Fasih of Mersin, all born around 1893 and conscripted in 1914. Tamari analyzes the crucial issues faced by soldiers during this transitional moment at what turned out to be the end of the empire. In particular he elaborates on these individuals’ reactions to the changing nature of the Ottoman state and how these three soldiers come to understand and act upon “the inability of Ottoman constitutional reform to create a multi-ethnic domain in which Syria (including Palestine) would become an integral part of the empire” (p. 1). The loyalty of Shehadeh and Fasih to a reformed Ottoman sensibility was overtaken in Shehadeh’s case during his years in a Siberian prison camp and the rise of Arab nationalist groups. Through his innovative readings and explications, Tamari reveals the many positions on Ottomanism and nationalism, and the hoped-for outcomes among Palestinian and Syrian intellectuals during the war—outcomes that included a confederation with Egypt engineered by the British, a new and inclusive Ottoman state, and Arab independence.

More specifically, Tamari focuses on how the “subjective experience of war” is articulated in “the search for a national and personal identity and the internalization of modernist sensibilities” (p. 85). Turjman was a student of Khalil al-Sakakini (b. 1878, d. 1953) and shared his teacher’s humanistic view that envisioned a world beyond religious identity, state power, and authority. On the prospect of being sent to the front to fight in September of 1915, Turjman writes, “And why should I go? To fight for my country? I am Ottoman by name only, for my country is the whole of humanity” (p. 133). Tamari details Turjman’s close following of current events—his anti-Ottomanism is expressed through his criticism of the profligate lives of Ottoman officers in the face of the starving population, as well as his despair after death sentences are pronounced for twenty-one Arab activists and intellectuals in 1915 (hanged publicly in 1916). Following the news of Sherif Hussein’s fight against the Ottomans in the Hijaz in July 1916 and of British military victories over the Ottomans, Turjman’s youthful spirit and naïveté courses and infuses his discussions of politics, war, and nationalism, as well as his own fate and future.

Turjman expresses modern views and concerns that might surprise today’s readers. Tamari brings some of these to the reader’s attention and elaborates on new notions of modernity in this transitional moment. In particular, he highlights the shifting methods of keeping time and recording dates (Turjman uses all three simultaneously—Hijri, Ottoman, and Western), Turjman’s embrace of biomedicine, and his disdain for authority but deep regard for honor and the obligation to protect the weak. He espouses views on women that advocate for greater freedoms and especially education, mirroring Qasim Amin’s famous 1899 text, The Liberation of Women [Tahrir al-Mar’a]. Tamari addresses these incidents from Turjman’s text and deftly weaves a contextual history of lives away from the front lines of World War I. The resulting essay, “The Erasure of Ottoman Palestine,” offers a vivid, fleshed-out portrait of Ottoman Palestine, the very Ottoman Palestine that was to disappear.