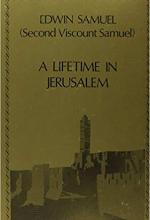 Edwin Samuel, son of Palestine’s first high Commissioner under the British mandate, made it to Palestine before his father herbert Samuel, arriving in 1917 as a young officer in the British army on the day the British rebuffed a turkish attack at nebi Samu’il (hence Edwin’s persistent nickname “nebi”). returning in 1920, he was, in his words, “one of the few who served in the Palestine administration from almost the beginning to the end.” (p. 49)
But who did he serve and why? reading his memoirs, A Lifetime in Jerusalem, one finds a plethora of bureaucratic satisfactions and pleasing vignettes from his life in Palestine, from a penchant for dressing up in local costumes to enjoying his status as a “feudal baron” when in charge of the ramallah district in the 1920s to the “considerable consolation” of producing well-ordered administrative forms and procedures. Samuel moved steadily up the bureaucratic ladder in a wide variety of assignments where his penchant for order seemed more important than specific skills: secretary to the Jerusalem town planning commission, an officer of the ramallah district, the planner of the new naturalization office (he was particularly proud of devising a clear application for a Palestine passport), an officer in the nazareth district, migration officer, chief censor during World War ii, and, from 1945 to 1948, head of the Palestine Broadcasting Corporation. despite the dramatic events around him or indeed happening directly to him (such as a shipwreck in the dead Sea and a kidnapping attempt at gunpoint), he portrays himself as largely unflappable, the very model of a British civil servant.
Yet this exemplary scion of the British Empire had additional loyalties from the beginning. Samuel served as British army liaison officer to the Zionist Commission in the immediate aftermath of the 1917 Balfour declaration, was mentored by Weizmann, and provided his father in london with a wealth of information which, historian tom Segev notes, his father used to assist Weizmann in “planning the Zionist movement’s tactics.” indeed, Segev concludes that the letters of the young Edwin “show that he in fact served as a kind of double agent.”1 While this is an interesting historical nugget, more compelling in reading the memoirs is that Samuel never evinced any conflict in his loyalties to Empire and the Zionist cause. rather, it is the permeability, or indeed the intermeshing, of these two political spheres – and their accompanying social worlds – which is of interest. While the Balfour declaration’s support of “the establishment of a Jewish home” in Palestine obviously offered a raison d’être for loyalty to both, Samuel never feels the need to explicitly evoke guiding principles. Calling himself an “ardent hebraist” (p. 44) from 1917 (when he put up hebrew street signs in his military camp and co-authored a pamphlet on “Parts of the rifle in English and hebrew” with Vladimir Jabotinsky), Samuel’s attachments seem to require no further explanation. his casualness about his Zionist connections – often mentioned as an afterthought – may sometimes be deliberate in memoirs written in retrospect (he did not keep a diary). For example, he dropped a second mention of the fact that he “had been on the arab list of Government officials to be assassinated in the First arab rebellion” (p. 232) as an aside in explaining the “strain of living in a mixed neighborhood” (talbiyeh) during the last days of mandate Jerusalem. one reads this memoir of a very discreet civil servant obliquely, as a document that conceals as much as it reveals – as well as providing a detailed portrayal of a mandate official at work in a changing Palestine.

A Year in Ramallah

in his year as chief officer of the ramallah district in the first decade of the mandate (1925-6), Samuel finds a countryside ravaged by World War i and “four centuries of ottoman misrule” (p. 65) with forests decimated, terraces collapsed and the younger and more energetic rural population emigrated to the United States (he estimates about a third of the income in the district is remittances). Samuel begins to visit villages and to diligently jot down possible improvements in his notebooks. he has some sympathy for the heavily indebted peasants – to moneylenders in nablus, according to Samuel – and finds his most unpleasant task is collecting taxes, including “astronomic arrears” from villagers. his method, however, is somewhat peculiar involving “fearsome
threats in broken arabic but on biblical models.” he gives an example:
“if you pay now what i ask, oh my children, i shall be as dew upon your fields, as honey upon your lips. But if you do not, then i shall come as a wolf in your sheep-fold by night …” (p. 74)

Paternalism does not quite explain this eccentric linguistic display. Samuel’s view of himself as a “feudal baron,” even if slightly ironic, firmly places “his” peasants in the “eleventh century,” (p. 76) even while he acknowledges their “immense demand …
for education.” (p. 74) he does occasionally mock his own reforming zeal, particularly one of his chief reforms – the substitution of iron ploughs purchased from a German firm in Jaffa for the wooden ploughs employed by peasants. the iron ploughs promptly and completely broke upon encountering the stony soil of the ramallah hills: “heaven protect all peasants against well-meaning reformers from the city!” (p. 77)
a 1930 visit to Palestine by George Bernard Shaw provides an amusing interlude as Samuel and his wife listen politely to Shaw’s derisory answers in response to their inquiries about his impressions of holy land sites. “as for the holy Sepulchre, Shaw remarked, “you can have it for a tuppence.” indeed, one of the few sites Shaw approved of was the dead Sea: “that is real and not a fake.” (p. 112) Shaw then hurried off to have dinner with the american boxer, Gene tunney, also touring Palestine.

it is interesting that Samuel, with his affiliations, including his marriage to a Jewish migrant to Palestine extremely active in Zionist causes, is placed twice in departments dealing with the most contested subjects of naturalization and migration, first setting up the naturalization office (1926-7) and then serving as deputy at the department of immigration (1934-39). in the interim between his two posts, he went on a fundraising trip to the United States for the United Jewish Appeal. Indeed his Jewishness, if not his Zionism, was among the reasons he was nominated to the department of immigration, where the head, Samuel notes, “thought i would be useful to him in handling the
Jewish communities, both in Palestine and abroad.” (p. 148) Samuel provides detailed insights into the workings of Jewish immigration to Palestine and the dominant role of the Jewish agency, as well as the “open secrets” by which immigration quotas were increased, including, for example, the requirement by the agency that each bachelor immigrant “take along with him a young unmarried woman ... as his ‘wife.’” (p. 156) Samuel also notes that aside from a small reserve for non-Jewish immigrants coming to work in missions or foreign banks, “non-Jewish immigration to Palestine was prohibited, it was a Jewish reserve.” (p. 156) he undertakes an extended visit to Eastern Europe (as well as Salonica and istanbul) to “speed up still further the handling of immigration applications.” (p. 163) although with his typical understatement he describe a visit to Germany under hitler as merely “unpleasant,” his concern, including taking charge of cases where he was able to find loopholes to turn “illegal” (always in quotation marks) to legal immigrants, is motivated by the rise of hitler, as well as his Zionist affiliations.
if Samuel did not find his affiliations a problem, the rising arab nationalist movement did, although it was probably opposed to him in both of his loyalties. in 1936, he reports:
it was at the beginning of the general strike that i received a warning from a friendly moslem in hebron, through an arab member of my staff that i was high up on an assassination list … (p. 166)
But aside from listing several security measures, he offers no reason or context why he might be targeted and, without a hint goes on to fulsome praise of a man “of rare originality of mind” who was “thoroughly unpopular with the British community in Jerusalem” – orde Wingate and his military operations in tandem with the hagana. (p. 169)

Last Days of the Mandate

Samuel himself probably kept away from any direct involvement with the military side of the Zionist project, although, when assistant district Commissioner of the Galilee in the 1930s and “rather worried about Safad,” he let the hagana know “that, if they would take full responsibility for the Jewish quarter, they could use their (illegal) arms openly, in case of attack, without fear of arrest” (p. 135), an act which must have been known and accepted by his mandate colleagues. during his tenure as head of the Palestine Broadcasting Service (PBS) in the last three years of the British mandate, he once again catalogues his administrative improvements and sound personnel policies, but notes:
the relations of the hagana with my P.B.S. Jewish staff were also a matter of considerable delicacy …. as long as they were only on part-time duty and their hagana work did not interfere too seriously with their official work, i said nothing ….one was killed in a punitive field operation against arabs on the ramallah-latrun road near atarot: it was not easy for me to explain to the Government, when officially reporting his death, how it was that, as a Government officer, he had been involved in this operation. (p. 240)
Samuel does give a vivid portrait of daily life in his Jerusalem environs as British power wanes – and abdicates responsibility. one of the few times he voices a sense of outrage is in his depiction of the “scorched earth policy” of Chief Secretary Sir henry Gurney, whose principal function was to “liquidate the mandate.” he describes
Gurney summoning a meeting of all heads of departments, Samuel included:
… he cold-bloodedly announced that there was to be no formal handing- over to any Jewish or arab nationalist body or even to any local authority. Before Britian pulled out of Palestine, all lunatics were to be released from Government asylums and all convicts from the gaols.” (p.221)

this outburst aside, Samuel’s Lifetime in Jerusalem is presented in a deliberate low- key manner that makes it far from a thrilling read. there are certainly too many administrative anecdotes for most readers except scholars of bureaucracy (although Samuel does apply an interesting administrative innovation to the memoir genre – his childhood experiences are the last chapter on the rational grounds that “other people’s childhoods are usually a big bore.” (p. 306)) But the story of “a kind of a double agent” nonetheless adds to our understanding of the inner workings of the mandate and the normative status of the Zionist project in key administrative sections like immigration, as well as being an exemplary story of a double loyalty that is never acknowledged or treated as such. indeed, Samuel continued his double affiliations quite comfortably to the last – serving in the 1950s and 1960s both in the hebrew University in Jerusalem and in the House of Lords in Westminster.

Penny Johnson is an associate editor of Jerusalem Quarterly.