Just An Ordinary Day in Gaza 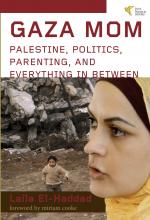 “You know things ain’t right,” writes Gazan Laila El-Haddad in a 2005 blog, “when a child has become so accustomed to warplanes that he confuses them with birds.” (p. 35) Her one-year-old son Yusuf has just identified an Israeli warplane flying overhead to bomb Khan Yunis, as a jaja, a chicken. Leaving aside the aptness of Yusuf’s observation – aerial bombardment could indeed be called “chicken” in the sense of cowardly – El-Haddad’s blog from Gaza since 2004 (originally Raising Yusuf and then Gaza Mom) excels in marrying the everyday with the surreal and the domestic with the political, moving from anxiety about Yusuf’s toilet training to her own panic attacks from incessant Israeli sonic booms to chaos in Gaza’s streets. And meanwhile, Yusuf decides on his own greatest object of fear: not warplanes, but the lowly vacuum cleaner.

Gaza Mom collects El-Haddad’s blogs from 2004-2010, as well as dispatches she wrote for Al Jazeera and other media. During those years, Gaza experienced an incredibly rapid series of events: Israeli disengagement or “occupation by remote control,” (summer 2005) the Palestinian elections (January 2006), Hamas-Fateh confrontations (2006), kidnappings and lawlessness (2005 and 2006), the Israeli siege (2006 to present), the besieged, and hence short-lived, unity government (2007) and Operation Cast Lead (December 2008-January 2009).
Reading this volume is a healthy antidote to the amnesia of the present; I found myself “remembering” the many casualties of the intra-Palestinian tensions and clashes of 2006 – only five years ago – that I had filed away as forgotten. And El-Haddad’s wry observations add a sharp twist to conventional memory. Take disengagement for example. El-Haddad acutely analyzes this “disengagement from justice” and decries the Weepy Settler Syndrome: “I’ve had it. I think I’ve seen one too many images of weepy settler theatrics (and weepy settler questions on radio interviews) for my own sanity.”
(p. 79) But disengagement also offers Gazans an opportunity for rare public celebration. Again, El-Haddad sounds an ironic note. Contemplating a press release from the Palestinian Authority where Mohammed Dahlan announces that thousands of T-shirts and pants are being made to distribute throughout the Gaza Strip, she writes: “Did I just read that correctly? Is it just me or is it difficult to imagine thousands of Palestinian men wearing pants that read something like…. ‘Reclaiming my gem.’ Yikes.” (p. 65)
As the January 2006 parliamentary elections grip Gaza and turn it into a “horribly decorated circus,” (p. 125), El-Haddad decides to call the Fateh election hotline (p. 122) and finds the very model of a pleasant, Teflon-style young PR man on the line who explains how Fateh has made mistakes and has a “few rotten apples” but is committed to the rule of law. As El-Haddad bemusedly hangs up the phone, she has a bright idea: “I contemplate the possibility of outsourcing call centers to Gaza.” When Hamas sweeps to victory when “no one – no one – expected Hamas to win” (p. 126), she records Fateh’s defiant reaction as young supporters swarm President Mahmoud Abbas’s house and call for his resignation and notes prophetically that “Testosterone, crushing, humiliating defeat and AK-47s are not a good combination.” (p.128)
El-Haddad’s blogs hold up better than her published journalism, which is well-written but somehow dated, and it is interesting to consider what a blog of the moment gives the reader that a polished piece of journalism does not. Blogs are of course problematic sources – generally with no claim to standards of journalism, and replete with opinion rather than evidence, although El-Haddad’s matter-of-fact voice and her eye for detail do generate trust. Still, it is precisely because blogs do not claim to tell the “full story” with a clear narrative line, but rather offer a succession of moments in time, that they may capture the complicated texture of events in a place like Gaza. This is particularly true as El-Haddad lives through the first bitter days of intra-Palestinian conflict in 2006, and the chaos, kidnappings and lawlessness that preceded it. On 21 December 2005, after a week of Israeli sonic booms have frayed El-Haddad’s nerves to the breaking point, Israel cuts off electricity and armed Palestinian gunmen kidnap Belgian and Australian teachers at the American International School. El-Haddad ends her blog for the day:
Cutting off electricity for 1.5 million civilians or kidnapping schoolteachers for political ends? Who wins this week’s DMD [Dumb Move of the Day]? The verdict’s in: Dumb, and dumber. Now excuse me while I go get my flashlights and earplugs ready. (p. 107)
Marking “round one” of Hamas-Fateh confrontations on April 22, 2006, El-Haddad writes in darkness as “friendly neighborhood gunmen” have accidentally shot the electricity cables. She describes a stone-throwing confrontation that day between Al Azhar (Fateh) and the Islamic (Hamas) university students:

Amid the madness, a lone vendor roamed around the angry crowds selling licorice juice to thirsty stone throwers (honestly only in Palestine). (p. 188)
When the confrontations spiral into armed conflict in the summer, El-Haddad is in the United States. Her husband Yassine, a medical student there, is from a Palestinian refugee camp in Lebanon and cannot enter Gaza. Her blog is thus also written for an absent husband who is missing “Raising Yusuf.” El-Haddad delights in Yusuf becoming a Gazzawi – and amuses us as well with her passion for Gaza recipes (including photos), Gaza vegetable markets and the Gaza sea. When Yusuf, age one, wolfs down a plate of Gaza-style chicken livers replete with chilies and spits in disgust at dairy products, she crows that it is “further proof that Yusuf has picked up more of my Gazan roots than his father’s Haifawi ones.” (p. 23)
El-Haddad is also in the United States during Israel’s war on Gaza in Operation Cast Lead, and her reporting, although often based on her father and mother’s eyewitness accounts, is inevitably second-hand, particularly as the events of the war are so widely known; the book is uneven here, as well as at other times when El-Haddad is not in Gaza. An exception is a valuable phone interview with militants on both sides of the Hamas-Fateh divide in the summer of 2006. El-Haddad conscientiously reminds us always of the larger context of the Israeli occupation, but the incessant repetition of Israeli strikes, tank incursions and civilian deaths is hard to convey. She does this brilliantly, however, when she sits down to sage tea with a man in Beit Hanun who has a “museum of Israeli war artifacts – a room full of 50kg tank shells now converted into vases decorated with an arrangement of brightly colored flowers.” El-Haddad remarks that his business is so brisk that he “can barely keep up with the demand.” (p. 158)
However, rather than the drama of Cast Lead or the horror of air raids, it is the more mundane misery of the Rafah border crossing that remains in the imagination, as El-Haddad and Yusuf wait time and time again when they travel between Gaza and the United States. The waiting zone where only uncertainty is certain and where there are never any answers to questions (Will the crossing open today? Should we wait or return?) is a quintessential Palestinian space and El-Haddad’s gift for description brings it to life. In that zone, readers of Jerusalem Quarterly may be interested to know, Jerusalem is so remote that it is a subject for angry sarcasm. After many days of waiting
– some people for two weeks – there is a rumor that Rafah will open and crowds gather on the Egyptian side of the border. One man, “exhausted and frustrated” began to push his bags on a trolley through the equally exhausted passengers.
“Where the hell do you think you’re going?” bellowed one of the Egyptian officers.
“To Jerusalem, where do you think?” he snapped.
It was nearing the end of our long day. Overcome by exhaustion, we didn’t know whether to laugh or cry.” (p. 232)

Penny Johnson is an Associate Editor of Jerusalem Quarterly. She is the issue editor of JQ 49.