Have You Heard the One About The Wall?

Have You Heard the One About The Wall?
Author:
Penny Johnson
Digital Section:
Reviews
Reviewed Book 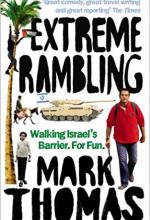 The English have a thing about walking, whether the poet Samuel Taylor Coleridge expressing his utter delight at (literally) tumbling down sharp cliffs in the Lake District during the drenching rain or the philosopher Bertrand Russell setting off on a day walk – alone – on his wedding day. And Palestine has had its share of British colonial ramblers: from the nineteenth- century mapping and naming journeys of the Palestine Exploration Fund, with their imperial and Biblical motifs, to T.E. Lawrence’s early twentieth century ramble from Sidon to the Galilee where he complained to his mother of Palestine’s “irritating little hills.”

What we haven’t had until British stand-up (or now walk-up) comedian Mark Thomas decided to walk the entire length of The Wall in 2010 is a comic, rather than a colonial, ramble “along the Palestine Way,” as Thomas calls his zig-zag route along Israel’s 415 (and counting) kilometer barrier. With his heart and politics all in the right place – his exposition of the illegality of the Wall is brief but to the point – he sets out as a proper English rambler with bobble hat, boots and retractable stick, double socking, and a “morning check list,” although he admits that in most circumstances “there would be something uniquely undignified about a man on the wrong side of forty-five carrying wet wipes for personal use.”(p. 113) He can mock his British determination to be the first to walk all the Wall:

… on one hand I’m following the spirit of solidarity shown by the International Brigades while on the other I’m just one more public school explorer in a foreign land. It leaves me unsureas to whether to sing “Viva La Quinta Brigada” or scream “Bagsey first up Everest!” (p. 72)

His nationality accompanies him in other ways:

After my first week in the West Bank I decided that I need a T-shirt with the words “Yes I’m British. Yes I know about the Balfour Declaration.” (p. 53)

As his travels continue, he becomes “tactically Scottish,” forbearing, however, to reveal Lord Balfour’s Scottish origins, and offering snippets instead on the Culloden Massacre and other English atrocities against the Scots.

It is perhaps no surprise that Thomas is stopped as he attempts to walk through his first checkpoint in the Jordan Valley, or that, like many of us of a certain age, his first silent thought as a young Israeli soldier asks him what he is doing is “Is your teacher around? Or any other grownups?” When Thomas instead replies, per the advice of his Palestinian companion, that he is writing a book on birds and flowers, he is handed over to another “twelve year old in wrap around shades” who proceeds to investigate his Kendall Mint Cake (“the personification of Englishness enshrined in a mint and sugar-based confection item,” Thomas kindly explains). The soldier then stops him from writing in his notebook.

“Security…. you could be writing a report.”… And what would I be writing?

“You could tell them that we have gun … and shoes.”

… If Hizbollah finds out you have shoes, how will it affect security? (p. 26)

Finally released from the checkpoint and the shoe security breach, we resume our merry (and often not so merry way) along the Palestinian side of the Wall. Village after village offers tea and stories of land confiscation as Thomas, perhaps again betraying his national origins, attempts desperately to stick to his walking schedule:

Frankly, it would save a lot of time if they could all just pin the number of dunams on their chest like a marathon number and we could all crack on. (p. 46)

Comics, particularly of the British stand-up variety, find it hard to resist a good verbal crack or a tempting one-liner or put-down, and this may irritate readers who expect ordinary Palestinians to whom extraordinary evils have happened to be viewed only heroically or tragically. Thomas can find himself out of patience with the repetitive character of the village “talk on the council roof”(the dunams again) that is the “poor man’s PowerPoint presentation” (p. 50) and he has the comic’s sardonic eye on the sentimental. A veteran leftie who has endured many campaign films, he finds himself watching one in a small village in the Jordan Valley replete with children singing songs of peace. He opines that the all too real plight of the village also includes an “infestation of singing children” and notes:

I may sound cynical but even if Che Guevara had been there, he’d have been thinking “Please God let it be Rambo by mistake…” (p. 32)

Yet in the end he turns his satirical eye on himself, the Brit with a checklist rushing to complete his schedule and thus sometimes failing to take time to listen and understand. Drenched and slowed down by heavy rain, he and his walking companion Muhammed seek a cup of tea in a Ramallah-area village café after which Thomas wants to push on. When Muhammed says yet another councilor is coming to talk to them, Thomas says they have to “keep to the schedule” and that they have heard enough stories about how “Israelis have taken their land and shot their donkeys.” (p. 198) When Muhammed points out Thomas could well ask why there are so many men sitting around unemployed in the tea shop on a winter afternoon but that he is the “boss,” Thomas has a sharp realization:

I am humiliated by my own pomposity and dismissive attitude. Feeling shame, I want to say “You’ve got me wrong. Please don’t stereotype me. I’m not a colonialist. I’m not a racist. I’m just an arrogant bastard. (p. 199)

Yet humor can work also for understanding, providing precious moments of shared laughter. At the Qalqilya zoo, at the end of one leg of his journey and about to return to England for Christmas, Thomas realizes “with crushing sadness” that his then companion Mustafa, in a bad mood for several days, must see him as another variety of tourist: “We are doing the one thing he cannot: leave.” But then the uneasy tension between them dissolves as they examine an “emaciated stick of a reptile” which a sign proclaims as the Palestinian national snake.

“You have a national snake? Well it looks exhausted,” I blurt out before I can stop myself.

“Just like the people,” says Mustafa, suddenly cackling at his own audacity. “Your snake is knackered,” I return, warming to the theme.

“I know,” he says, and the sign says it is not even poisonous.

He gasps, his face full of mock outrage. “Our snake is not even dangerous?” He is laughing hard now….

I wonder aloud “Do you think it is possible to see something with a little less symbolism?” (p. 86)

And indeed, as he continues, the jokes dry up and the stories return as he walks with schoolchildren through a “tunnel of shit” under Highway 443, the only way boys from the village can reach their school on the other side of the highway. The tunnel, constructed by Israel to “solve” the problem of schoolchildren who are not allowed on the Israeli-only road, has two channels:  one where the children walk and one where sewage from the Beit Horon settlement flows. As he continues walking towards Jerusalem, stories he has forgotten along his journey accompany him: “having left them behind, these tales have caught up with me.” (p. 218)

Along the way, unplanned encounters with Israeli soldiers and settlers and planned interviews with Israeli officials provide comedy with a darker twist. While we enjoy with Thomas the bed and breakfast scene run by Natan, an Ariel settler whose garden features a priapic fountain and Snow White and the Seven Dwarfs, Natan’s spouting of every Zionist cliché in the book deadens even Thomas’s humor. And then there is the interview with the intellectual architect of the barrier (“a cross between a cab driver and Dr. Strangelove”) Professor Arnon Soffer, who rails almost equally about the Arab demographic flood (Palestinians with twelve children) and “bloody Tel Aviv with their small dogs and croissants” and failure to breed. (p. 207) Or Danny Tirza, the designer of the barrier, who calls the Green Line “nothing” and praises himself when Thomas brings up the children walking in the tunnel of sewage, noting that he has placed a step there for the kids to avoid the waste. Thomas comments:

He is seemingly unaware that his effort to alleviate the children’s experience while forcing them to share a tunnel with human shit is nothing but an admission that he knows how wrong it is. (p. 313)

Next to Tirza and Sofer, Israeli soldiers at checkpoints seem almost innocent, although at one point, “trespassing” in the no-go zone on the Israeli side of the Wall, he and his Israeli guide are confronted by very angry soldiers:

I respond to the four soldiers who now surround us at gunpoint in a way that only the British middle class can: I bellow the solitary word: “Sorry”. It is uttered in the traditional way, cringingly, and more sung than spoken, as much a sign of embarrassment as an apology. (p. 187)

Endearingly, Zohar, his Israeli guide, “displays his own sense of impeccable timing” at this point and starts to hand out leaflets on Israeli war crimes.

Schedule and a British quixotic sense of adventure aside, what keeps Thomas going is also the beauty of the hills that surround him:

Yet every day I start with optimism. Not through strength of character on my part: no, it is the sight of the hills…. Each day I am amazed by their beauty – some times I nearly cry in awe. (p. 71)

Indeed, it is only during a stay in Jerusalem where the Wall runs along and through Palestinian neighborhoods – and where he meets the mega “religious real estate agent” Arieh King whose Israel Land Fund is one of the forces behind the Sheikh Jarrah evictions – that his optimism fails him:

I missed the walk and most of all I missed the hills with the fleeting glimpse of freedom they promise. Jerusalem was cramped and weird. It was packed with tourists, traders, the devout, the deluded, the armed and variations thereof. (p. 275)

But in the end, after traversing the Wall to its southernmost extremity and returning home, he feels that he has “rambled in the best sense of the word.” And in the end, he opines, the “barrier is mile and mile of self-delusion. (p. 332)

Delusions are of course the stuff of comic vision, but in the best comedies, delusion, like a midsummer night’s dream, melts away to a happy ending in ordinary life. Laughter alone will not melt the Wall’s concrete and barbed wire, but Thomas’s comic take – he also has taken his tales on a stand-up tour in the UK – both addresses new audiences and adds another dimension to the growing opposition to the Wall’s curtailing of human freedom: the right to ramble.

Penny Johnson is an Associate Editor of Jerusalem Quarterly who likes to walk.