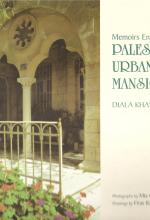 The cover photo of this beautifully-produced book features the entrance veranda of the Qlaybo house in Jerusalem, both elegant with its two trefoil arches and intimate in scale and decoration. Set at an angle, an open but recessed door invites the reader into a darkened interior. And so begins the journey of a young writer and interior designer, Dalia Khawasneh, into seventeen pre-1948 Palestinian urban mansions in sixteen Palestinian cities from Safad to Gaza. Through conversations over coffee with original inhabitants, e-mails with those in exile, and occasionally confrontations with new Israeli owners, Kawasneh attempts to bring to life houses darkened by time and transformed by history. The Qaraman home in Haifa, for example, now houses an Israeli supermarket, while the Jasir Palace in Bethlehem lost its owners to bankruptcy in the 1930s and has sheltered police, a government school, and most recently, the launching of an international five-star hotel.

Seeing these old houses, the "memoirs engraved in stone," through young eyes and sensibilities is refreshing; Kawasneh's reactions and encounters are as much a part of the story as the architectural details she observes. She muses about the library and poems left behind in the Hawwa house when the author of the poems fled from Acre to Amman in 1948: "Could he read them, the stranger who came to sleep in the bedrooms under the decorated ceilings? Did he walk in, drink tea that was still warm and casually read that poetry in Arabic about a child's dream, the ink not dry?" In another encounter, she asks the Imam family in Hebron (still living in their family house) how women can bear to wear the hijab (headscarf) in the scorching summer heat and is advised that "the hottest of earthly summer days are nothing compared to the slightest heat of hell."

Some houses are best understood through memory, such as the Khouri house in Jaffa, where both Kawasneh and the photographer were barred from entry in separate attempts. Evelyn Baramki's (Um Gabi) memories bring this pink sandstone house with its open Mediterranean style back to life. Her memories of childhood activities in the terraced garden with its three gates, the central liwan (meeting room), and the balcony over the orange grove bring back not only this ghostly house, once home to twenty-one members of her family, but ghostly Jaffa as well.

For other houses, such as the Husseini house in Jerusalem, built in 1902, the Al Alami House in Jericho, the Dahher houses in Nazareth and the Tuqan house in Nablus, detailed descriptions of interiors, coupled with the fine photographs of Mia Gr?ndahl, give the reader both an understanding of the beauty of the architectural forms and their relation to the functioning of a household of the day. (Although Kawasneh also shows that the house has multiple meanings: to poet Fadwa Tuqan, it was sometimes imprisoning, while to a younger generation, it represents a lost social world of childhood). The courtyard of the Tuqan house "is reached through the long, winding entrance, typical of old urban houses in search of privacy and cool air filtered of the dust and noise," an accompanying photo shows the deep shadowed arch leading into the cross-vaulted liwan, and the light and elegance of the courtyard. Here, as elsewhere in the book, Firas Rahhal's drawings of floor plans assist in understanding the functional logic of the architecture.

Encouragingly, the Tuqan house has recently been renovated by the Tuqan family; even more encouragingly as a model, the Iman House in Hebron was in the process of extensive renovation through the offices of the Hebron Rehabilitation Committee, a local initiative that has also done substantial renovation throughout Hebron's Old City. This is particularly good news given the terrible conditions described by Kawasneh (and worse in today's conditions)faced by Old City residents due to continued Israeli army and settler presence nearby: the Imam family, for example, only uses their back door to avoid settler and army harassment.

The photographs of Mia Gr?ndahl are given, and well deserve, equal weight in the text. They are excellent, and generally well-printed and placed. The interplay of Mediterranean light and shade, so much a part of this architecture, is captured well in the larger pictures; the smaller photos of architectural details also delight the eye. Her own eye captures the explosion of floral and geometric design on ceilings in the Dahher houses in Nazareth, the cast iron door stopper in the shape of a woman's bust in the Sabe house in Qalqilya, and the delicate iron work on a courtyard staircase in the Shamma house in Safad. Some photos have painterly qualities, such as the photo of a simple in-built wooden cabinet in the Imam house in Hebron, a pastel jumble of clothes and rags, with the ubiquitous plastic bags, spilling out of the bottom.

It would have been useful if all photos were captioned (many are) and also if a glossary of Arabic architectural terms used in the text had been supplied. A more extensive overview of changing form and function in urban architecture, as briefly noted by series editor Suad Amiry in her introduction, would also have helped the reader understand the houses better. There are minor errors in the text and occasionally the author's expressive style runs away with her. However, all those involved in the project have admirably achieved the aim, as Amiry writes, of understanding architecture as a "mirror reflecting human life," and readers will anticipate the next publication in this series on the rural architecture of Palestine.

Ironically, as the publication of Urban Mansions brought these beautiful houses, and the families that lived in them, to life in words and photos, at least one of the houses was threatened in reality. Images of the Shahwah house in Beit Jala, where "every stone is carved," flashed across television screens on many occasions in the past months as the Israeli army shelled Beit Jala. In the front line of fire, the stone front of the mansion is pitted and damaged - another memoir engraved in stone.