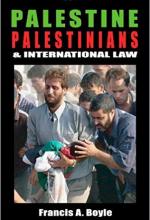 Diana Buttu is a legal advisor to the Palestine Liberation Organization.