Firro: The Druzes in the Jewish State 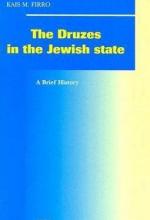 When the curtain fell on the war of 1947-48, the Druze living in the part of Palestine that became Israel found themselves cut off from the rest of their community in Lebanon and Syria. At the same time, unlike the more than 750,000 Palestinian refugees, none of the Druze had been displaced or driven from their homes. It is these two elements—isolation from their coreligionists and containment by the Zionists—that hold the seeds of the fissured identity of Israel's Druze today and help explain the feeling of tragedy or disaster, (musiba, as Kais Firro calls it, p. 248), that pervades their own views both of the past and the future.

In this fascinating study, Firro sets the (historical) record straight: What officially is portrayed as successful coexistence (of the "sons of Shu'ayb" and the "sons of Israel," p. 71) actually hides a rather ugly reality of co-optation, coercion, and control. That the Zionists did not expel the Druze—"technically" this would have been possible in 1948 because they numbered no more than 13,000, and Firro even outlines "a Zionist transfer plan" from the 1930s to move all Druze in their prospective state to Syria (pp. 26-32)—is because exploiting their position of weakness was seen as more useful to the Zionist goal.

By alienating the Druze from the other Arab communities, the Zionists sought to create "good" Arabs and "bad" Arabs and so "to turn the Druzes into a show case for the world at large of the 'benevolent attitude' the newly created Jewish state was willing to adopt towards 'non-hostile' minorities within its territories" (p. 4). As one way of turning the Druze into a "non-hostile" minority, the Zionists used the "battle of the harvests." Firro quotes Yigal Yadin, then chief of staff: "Every enemy field in the area under our control we must harvest. Every field we are unable to harvest must be destroyed. In any event the Arabs must be prevented from reaping these fields!" (pp. 54-55). The Druze were then given an "option."

Another way was the "creation" already in 1948 of a special "minorities unit" in the Israeli army that was made up of irregulars who joined mainly out of economic hardship. Among them were 80 "Syrian Druzes who had defected from the ALA [Arab Liberation Army] and the Syrian army." As the first commander of the unit acknowledged, "there had been a deliberate policy to recruit as many Syrian Druze deserters as possible so as to undermine the trust of the Arab countries in the Druzes" (p. 57). Or, in the words of another Israeli official, the aim had been to use the Druze as "the sharp blade of a knife to stab in the back of Arab unity" (p. 57). And, "Of course this act has destroyed all ways of going back [for them, i.e., the Druze]" (p. 58). The author aptly and ominously calls this chapter "Particularism Revisited."

For this kind of collaboration to work, inevitably there had to be someone willing to collaborate. Here Firro is brutally honest, one has to admit, in dissecting the various layers of the community's religious and political hierarchy, going back to the early 1930s. While many of its shaykhs insisted the Druze ought to remain neutral because the community "was too small and too poor to survive any involvement in the conflict" (p. 42), others saw a chance to have their ambitions fulfilled by siding with the Zionists. Soon (early 1950s) the Israeli secret service was dubbing Druze who were willing to cooperate the "'positive forces,' a term that became so firmly rooted that it is in use till today, together with 'negative forces,' i.e., Druzes who speak out against and act in opposition to official Israeli policy" (p. 91).

Firro also provides a detailed account of how official Israeli policy set out to confiscate Arab-owned land through "a relentless land acquisition program [underpinned by] an increasingly sophisticated legal apparatus" (p. 128) that spared neither Muslim nor Christian nor Druze, thus creating "an Arab proletariat" subservient to the Jewish economy (pp. 140-51). Here also lies the origin of the cul-de-sac in which the Druze found themselves as early as the mid-1960s. Then, in the mid-1970s, the educational system was co-opted "to inculcate Israeli-Druze consciousness," and soon a Druze underling in the Israeli Ministry of Education was writing, "The Druzes are different from the Arabs not only in their external appearance and traditional dress but also because they have distinctive characteristics and specific virtues: they are . . . polite, hospitable, energetic, courageous, erect of bearing and with fair hair and skin" (p. 241). The sarcastic spin Firro gives to this only deepens the sense of musiba with which he concludes his meticulously documented but highly readable study.

Mahmoud Yazbak is an associate professor of Ottoman and Mandatory Palestine history in the Department of Middle Eastern History, University of Haifa, and is the author of Haifa in the Late Ottoman Period, 1864-1914: A Muslim Town in Transition (Leiden: E. J. Brill, 1998).