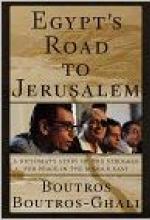 Boutros Boutros-Ghali
Egypt's Road to Jerusalem: A Diplomat's Story of the Struggle for Peace in the Middle East
1997
-
English
Purchase
Full text:

Egypt's Road to Jerusalem--the title says it all. The road had almost nothing to do with most, if not all, of the issues emerging from the Arab-Israeli conflict. It was a road that earned the late President Anwar Sadat kudos from the West and deep anger and approbation from the Arab world, where Egypt plays a pivotal role in all affairs. Perhaps the title of the book should have been "Egypt's Road to Occupied Jerusalem" in order for Boutros Boutros-Ghali to explain better why the journey to Jerusalem helped wittingly or unwittingly bring the Arabs to their present state of fragmentation and disarray.
Boutros-Ghali's book is more anecdotal than analytical. This quality, however, does not detract from his insights into the circumstances, motives, and dilemmas that led to the Camp David agreements and the peace treaty that ensued. Although there are many hilarious episodes, such as his meeting with Uganda's former ruler Idi Amin, there are significant and interesting observations and commentary on Israeli officials, African heads of state, and Arab and international public figures.
In many passages, Boutros-Ghali seeks to dissociate himself from aspects of Sadat's initiatives, in as much as they tended to marginalize the Palestinian question, and his propensity for theater, which earned Sadat and former Israeli prime minister Menachem Begin a joint Nobel prize for "peace." Yet, despite distancing himself from substantive elements of the Camp David agreements, Boutros-Ghali claims that he joined the cabinet as a junior minister for the opportunity to reinforce the political will of Egypt's government and to render policies more in tune with UN resolutions, Palestinian rights, and international law. The question remains whether Boutros-Ghali was able to influence Egypt's policy of defection from Arab ranks.
Although there is no reason to question Boutros-Ghali's intellectual and political positions as spelled out in the book, they did not have any impact or relevance. Boutros-Ghali, having been a highly respected professor who contributed articles and books that enriched the Arab national library in the 1950s and 1960s, found himself co-opted into a regime and policy that ran counter to what seemed to be his commitment. Herein is Boutros-Ghali's dilemma: When the president of Egypt invites you to join the cabinet, you become the servant of the state's policy, a policy that is determined and decided by the president, in this case, Sadat.
Boutros-Ghali reconciled his lingering beliefs and commitments with what he considered his service to Egypt. In the book, he demonstrates his eagerness "to serve" the head of state in a manner that suggests that state policy requires a level of commitment that supersedes earlier convictions or even any doubts about the policy itself. This explains his eagerness to point out his own doubts about Sadat's initiative but also to emphasize and articulate his conviction that he was serving Egypt and communicating its policy (I wonder how Boutros-Ghali judges present conditions and the asymmetry of power in the current negotiations between the Palestinians and Israel). It should be noted that Boutros-Ghali, whether in occupied Jerusalem, at Camp David, or in explaining Egypt's policy to African leaders, often sought to include in a legalistic and an elegant diplomatic style some of his early beliefs.
When the world community considered him its first choice to renew his five-year term as UN secretary general, it was a tribute to his brilliant intellectual and political contributions to the overall discourse in the UN. When the United States vetoed his reelection, he won the overwhelming sympathy, as he was rightly perceived a scapegoat to remove the UN as a contentious issue from the U.S. presidential elections in 1996.
There are two things Boutros-Ghali should have done but did not do. First, he instantly should have withdrawn his candidacy, then he would have made a major and invaluable gift to the future of the UN as he did in his "Agenda for Peace" and "Agenda for Development." Like many of his colleagues and friends, Boutros-Ghali, in my view, similarly should have declined the cabinet offer or resigned when he disagreed. Yet, remaining in his position made it possible for him to become the UN secretary general with the support of the country that ultimately let him down.
Second, Egypt's Road to Jerusalem should have come after a meaningful book about his five-year tenure as UN secretary general. The U.S. veto of the international consensus to reelect him elicited an outpouring of sympathy and support throughout the Arab world. Many Arabs in the street, and among the intelligentsia, considered Boutros-Ghali's victimization by a pro-Israeli superpower the opportunity for a genuine absolution of his role in Egypt's treaty with Israel. Rushing Egypt's Road to Jerusalem into print has dissipated much of the Arab people's emotional identification.
A personal note: Boutros-Ghali is one of my oldest friends. I admire his intellectual ability, the integrity of his methodology and the clarity of his presentations. In many instances we worked together at Al-Ahram and in other institutions and conferences. His sense of humor and self-deprecation are outstanding attributes of an inner calm that has characterized his teaching career and his editorship of International Relations Quarterly. This humor is interspersed throughout his book, and thus he becomes an insightful raconteur. Yet, the book does not stand up to his reputation, experience, and his earlier performance and accomplishments. In other words, it seems to me that Boutros-Ghali's brilliance as an academic and intellectual has a feeble sense of timing. This book does not do justice to his own proven analytical capabilities nor does it provide an assessment of the flawed course that the late President Sadat initiated.

-----------------------
Clovis Maksoud is director of the Center for the Global South and professor of international politics and foreign policy at American University in Washington.