2020 will be remembered as the year of the Pandemic. In Jerusalem, however, COVID-19 was exacerbated by four illegal Israeli actions. Their impact will likely create much more devastation than the deadly virus.

On February 18th, 2020,  Haaretz reported on plans by the Israeli Ministry of Construction and Housing to expand the industrial settlement of Atarot in East Jerusalem by building 9,000 residential units, a hotel, and industrial facilities. The project would stretch along the separation wall in the vicinity of the Palestinian village of Qalandiya and the area of what was once known as the Jerusalem International Airport. Israeli authorities approved the plan in December, marking the first new settlement project in East Jerusalem since 1997.

This area was key in the Kushner/Trump “Deal of the Century” – it aimed to create a group of hotels and commercial establishments for the purpose of “Muslim Tourism” (ie: tourism from the Gulf region) to Jerusalem. This plan essentially destroys any chance of rejuvenating Jerusalem’s only international airport, which served Palestine as a gateway to the wider world during the period of Jordan’s administration (1949-1967). 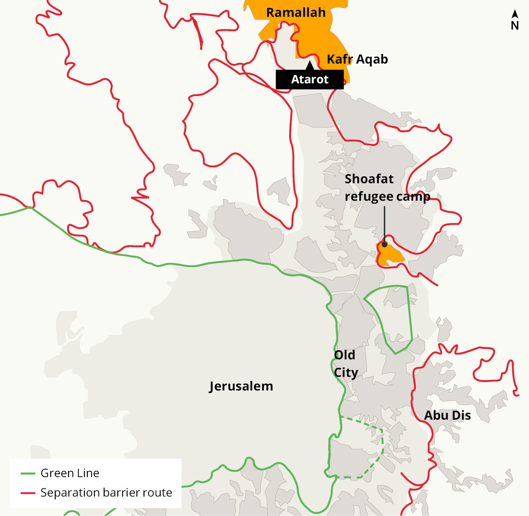 Map of the area. Image from Haaretz.

A second scheme known as The East Jerusalem City Centre Master Project was submitted to the Municipal Council last October. The plan targets an area adjacent to the Northern Wall of the Old City and extends over the heart of the commercial area of Arab Jerusalem through 13 streets, beginning from the streets of Sultan Suleiman and Salah Eddin. It will allow for the “development” of a public walkway space and residential units, and will likely demolish or displace existing units that have been deemed illegal or unauthorized by the Israeli government.

The third action, known as The Silicon Wadi Scheme in Wadi al-Joz/Musrara area, was adopted by the Jerusalem Planning Commission in coordination with the Jerusalem Municipality this past November. It also falls under the umbrella of the second aforementioned scheme. The project aims at introducing a high-tech complex in Wadi al-Joz that combines commercial establishments, technology companies, and a 900-room hotel in an area of more than 200,000 square meters. Israel has touted investments from the United Arab Emirates to finance this project, but no official deal has been announced.

Fleur Hassan-Nahum, Israel’s deputy mayor of Jerusalem, expressed optimism at the possibility of funding from UAE businesspeople to bring Silicon Wadi to life. Last August, the UAE became the first Arab state, after Egypt and Jordan, to normalize relations with Israel on the now-forgotten condition that settlement activities be halted.

The scheme will confiscate a large number of Palestinian private lands for the purpose of commercial development, and will transfer the bulk of garages and workshops currently located in Wadi al-Joz to Umm Tuba and Isawiya—two neighboring villages in Eastern Jerusalem. Most of these industrial workshops are today registered as public endowments (waqf ‘aam) and family waqf properties. Dozens of garage and industrial workshop owners in Wadi al-Joz were given notice to vacate their properties by the end of 2020, since their workshops were allegedly not licensed by the Jerusalem Municipality.

The fourth scheme aims to displace the last of the al-Jahhalin Bedouins from their current encampment. 3,000 members of the tribe inhabit al-Jabal in the northern slopes of Azarriye; they make up the only Bedouin community residing in Jerusalem. This community was expelled from Tel Arad, Negev and Beer al Sabi in 1948, and has since inhabited grazing grounds in Anata, Khan al Ahmar, Jericho Road and Azarriye. They are now being forcefully relocated to live near a garbage dump in Abu Dis or a toxic sewage treatment plant.

Israeli authorities have been pushing to demolish the village of Khan al Ahmar and expel its Bedouin residents since 2018, the latter an act that could be recognized as a war crime by the International Criminal Court. These plans were temporarily postponed due the coronavirus outbreak last year.

The Jerusalem Municipal Council, in close collaboration with the Israeli government, escalated these so-called “urban development” projects in the city throughout 2020 under the ruse of organizing neglected neighborhoods of East Jerusalem. Together, they constitute the most radical remaking of the Arab neighborhoods in the heart of Jerusalem since Israel established its control over the city in June 1967.

These plans call for the forced relocation of Arab businesses, population displacement, and the expansion of illegal colonial settlements. Despite the end of the Trump administration, there is little hope that the new Biden administration will put an end to this continued annexation and displacement. It is mainly popular activism in Jerusalem, spearheaded by the owners of industrial workshops in Wadi al-Joz, and the Palestinian Tourist Association in Jerusalem, that are publicly opposing these illegal measures.