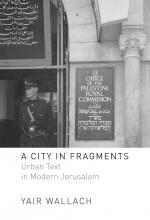 This review critiques Yair Wallach’s A City in Fragments, which attempts to collect and analyze the urban text of modern Jerusalem, covering the period from the 1850s to 1948. It explores how text in various forms shaped urban space and was used by authorities to create boundaries and facilitate encounters, focusing particularly on the transformation of Arabic and Hebrew as textual economies. Divided into eight chapters, (Stone, Dog, Gold, Paper, Ceramic, Wall, Cloth, and Cardboard), Roberto Mazza describes this book as groundbreaking in how it gives agency to items that in general have been considered accessories rather than agents of power, control, and conflict. He notes, however, that reading the texts from different perspectives can lead to disagreements with the author’s interpretations. The book is an important addition to a wealth of literature on Jerusalem, but one that stands out among them by offering the possibility to look at Jerusalem from a material perspective.

Roberto Mazza is a member of the Editorial Committee of the Jerusalem Quarterly, and a lecturer in history of the modern Middle East at the University of Limerick.