The Monastery, the Ethiopian Empress, and a Tale of Two Architects

Deep in the Jordan Valley, east of Jericho, at a site known as Qasr al-Yahud, there is a gem of modernist Palestinian architecture. The Ethiopian Monastery of the Holy Trinity is a striking cuboid chapel, with narrow windows that almost touch the flat roof. The curving ambulatory, executed in white cement, is almost reminiscent of Tel Aviv’s Bauhaus architecture, brought to Palestine by Zionist settlers. The story of this monastery’s conception brings together an Ethiopian empress, a colonial British architect, and a Palestinian Jerusalemite refugee of 1948.

The Ethiopian Orthodox presence in Jerusalem stretches back centuries. The most prominent locations associated with Ethiopian Christianity are the Dar al-Sultan Monastery and the striking round church of Dabra Gannat on Ethiopia Street in West Jerusalem, completed in 1896. Ethiopia’s late nineteenth-century rulers, Yohannes IV (r. 1872-1889) and Menilek II (r. 1889-1913), encouraged the expansion of the Ethiopian monastic and lay communities in and around late-Ottoman Jerusalem.

The construction of the Monastery of the Holy Trinity occurred in a very different context. Until the invasion by Mussolini’s fascist forces in 1935, Ethiopia was one of only two African nations not under European rule, while Palestine had been under British occupation since 1917. Emperor Haile Selassie (r. 1930-1974) visited Palestine several times during the Mandate period: at Easter 1924, he spent several weeks in Palestine before his first diplomatic trip to Europe, and then came back in May 1936 as an exile from the Italian occupation of his country.

In September and October of 1933, Menen Asfaw (1883-1962), Selassie’s wife and the Empress of Ethiopia, presided over the consecration of the Monastery of the Holy Trinity. Prior to 1933, the Ethiopian monks had resided in a cluster of huts, worshipping in a roundhouse known as the “reed church” (figs. 1 and 2). As an official of the Ethiopian Orthodox Church in Jerusalem told the Observer in 2018, Asfaw “saw their suffering,” purchased the land for the monastery and financed its construction. 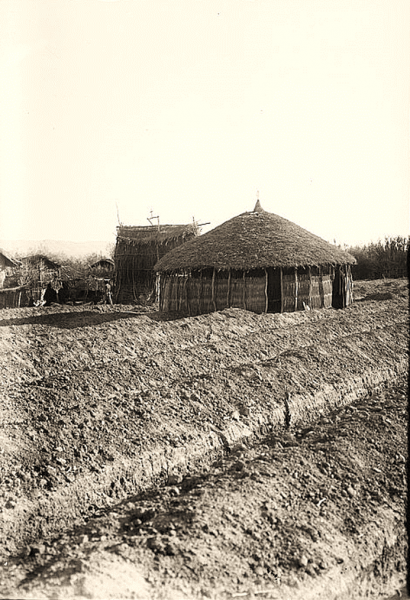 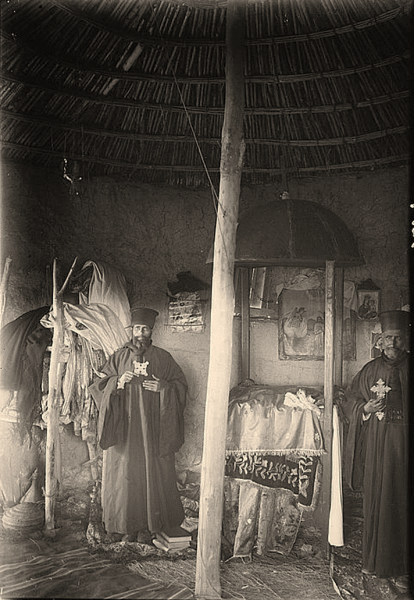 The monastery’s architect was Clifford Holliday (1897-1960), an advisor on town planning to the British Mandate government. Holliday’s plans shaped the growth of many Palestinian cities, including Jerusalem, Jaffa, and Lydda, as well as Zionist colonies like Netanya; the Jewish National Fund also contracted him to draw up a plan for Haifa’s expansion.

The contractor for the monastery’s construction could not have been more different than the colonial architect. Andoni Baramki (1894-1972) remains one of the best-known Arab Palestinian architects of the Mandate era. As Suad Amiry writes, his Jerusalem buildings were so numerous that “[a] drive along the Jerusalem-Bethlehem road created the impression that Andoni was the only architect in town.” The Palestine Post reported that both Baramki and Holliday were awarded one of Ethiopia’s highest honours by the Empress –  the Imperial Medal of the Trinity – for their work on the monastery, which represented a stylistic departure from the elegant arches and balconies of Baramki’s own architectural creations.[i]

Asfaw arrived in Jerusalem on September 26 of 1933, having travelled in a luxurious Egyptian Railways carriage and was officially received by the British authorities. During her time in the city, she stayed with her children (fig. 3) at the Ethiopian consulate on the Street of the Prophets, while the rest of her entourage, including Ethiopia’s foreign minister, were based in Goldsmith House on King George Street, a British officers’ club later dynamited by the Irgun, the  Zionist terrorist organisation.[ii] 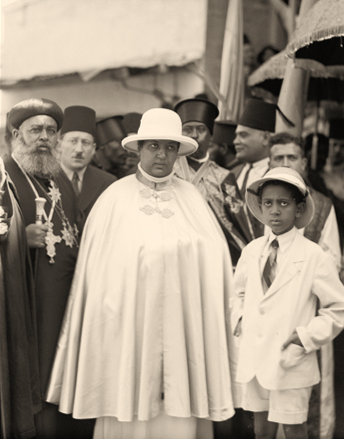 (fig. 4) By day Asfaw spent time with the Ethiopian community, waking up at 5:30AM to pray at the Church of the Holy Sepulchre and Dar al-Sultan; in the evenings, there were banquets held at the King David Hotel and artistic performances at the Edison Theatre, a Zionist establishment founded in 1932.[iii] The Empress met pro-British Palestinian figures, Jerusalem’s mayor Ragheb Nashashibi and Ruhi Abdul-Hadi, at a reception in Government House. Also present was Italy’s Jerusalem consul, two years before his country invaded Ethiopia.[iv] The centrepiece of Asfaw’s visit was the consecration of the Monastery of the Holy Trinity on October 1. The Palestine Post reported the event as follows:

Members of the Executive Council of the Palestine Government were present at the service yesterday, as well as the Mayor of Jerusalem, and the heads of the Orthodox Syriac and Coptic Communities. A large crowd of guests witnessed the colourful pageant accompanying the consecration, candles being held also by the visitors. The service was followed by addresses by the head of the Abyssinian Community and the Abyssinian Consul. 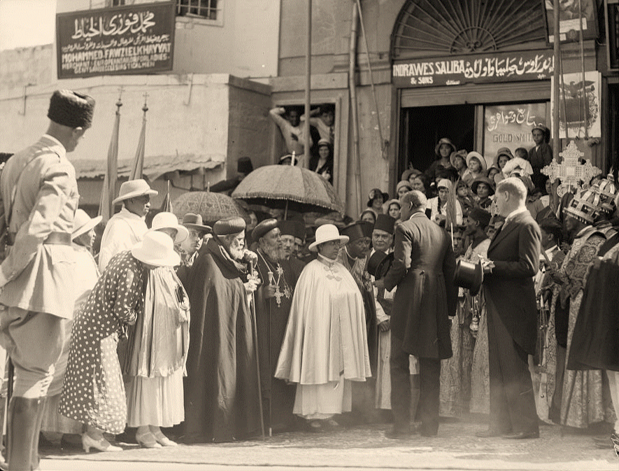 The event was captured by photographers, the crowd assembling beneath the Ethiopian Lion of Judah over the monastery’s entrance (figs. 5 and 6)

Asfaw travelled extensively around Palestine, to sites of religious importance such as Bethlehem and Nazareth.[v] In Tel Aviv, she was received by the city’s mayor, Meir Dizengoff, and took tea at the Palatin Hotel where “British, Abyssinian and Zionist colours were flown. She watched a performance by the Palestine Opera Company (another Zionist institution) and presented the prima donna with ‘a medal bearing the portrait of the Emperor of Abyssinia.”[vi] After being courted by the Zionist movement (a precursor of the later strategic alliance between Israel and Ethiopia under Selassie’s rule), Asfaw travelled northwards for several days to  Lebanon and Syria; she started on her journey home on October 23rd.[vii] 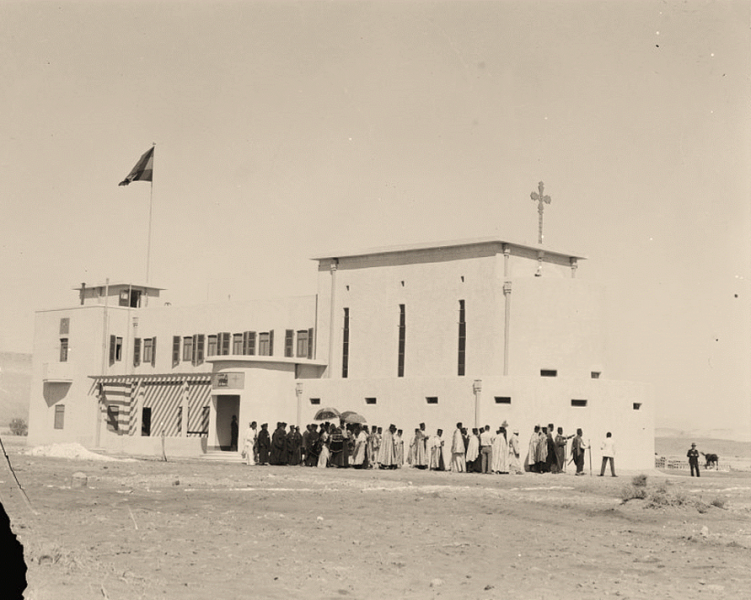 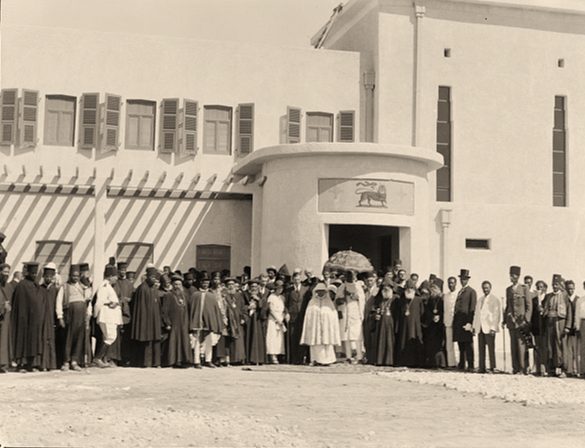 Fifteen years later, with the departure of the British, the Nakba of 1948 descended upon Palestine. While Holliday’s career continued as a town planner in Britain and other colonies,      his former Palestinian colleagues were not so lucky. Among the 531 villages and eleven urban neighbourhoods ethnically cleansed by Zionist militias was Western Jerusalem, where Andoni Baramki had built his family home. The Baramki family fled, and their home, just over the Green Line, was derelict for many years before being transformed into today’s “Museum on the Seam,” whose exhibits celebrate Israel’s occupation of East Jerusalem in 1967.

The June 1967 war, known to Palestinians as the Naksa, had severe implications for the Monastery of the Holy Trinity. Shortly after Israel’s military occupation of the West Bank began, the site was sealed off by the Israeli army and laced with thousands of landmines to prevent the return of Palestinian refugees. After over half a century of abandonment, a correspondent for the Observer wrote that the monastery remained “hauntingly beautiful.” Photos in the Times of Israel show its interior pockmarked by bullet holes.

With the de-mining of the area recently completed by a British NGO, it seems likely that the Holliday and Baramki’s modernist creation, the monastery first opened by Ethiopian royalty, may once again be visited, prayed in, and inhabited by monks. This assumes that the monasteries of Qasr al-Yahud will regain their place among Palestine’s pilgrimage sites when tourism resumes. Given Israel’s plans to annex the Jordan Valley, the site will probably be slickly presented as another Israeli tourist attraction, with no benefit to local Palestinian communities. There will likely be nothing to indicate to visitors that the Palestinian who played a key role in the little building’s construction lost everything and was made a refugee by Israel’s creation.

Gabriel Polley is an activist and scholar whose research focuses primarily on Ottoman Palestine. He holds a PhD in Palestine studies from the University of Exeter, his thesis exploring British travel to Palestine in the nineteenth and early twentieth centuries.