This paper examines shifting attitudes in the late Ottoman official culture, with the argument that Palestine was claimed as an indispensable part of the imperial geography through modern technologies of photography, cartography, and warfare. The time period extends from the beginning of the construction of the Hijaz Railway in the 1880s to the British occupation of Jerusalem in 1917. The study is based on visual  documents (photographs, maps, and postcards) drawn from the Ottoman archives, as well as from coverage in the Ottoman press of the time, most extensively from Servet-i Fünun. The discussion  is organized around three key episodes. The first involves the construction of the Hijaz Railway, recorded by maps and a wealth of photographs. The photographs taken from heights, show endless landscapes crossed by  rails, bridges, and  tunnels –  and crowded with Ottoman officers. The second explores how the Ottomans claimed Palestine through cartography. The  topographic, ethnic, and  touristic maps surveyed, organized, and conveyed a range of information on the district. The third focuses on the battles of the Gaza Front in 1917, tracing the advances and defeats of the Ottoman army as recorded by a series of maps accompanied by Hüseyin Hüsnü Emir’s daily reports published in Yıldırım 1921. Significantly,  World War I  brought Palestine to the forefront of Ottoman military and political agendas, as conveyed through illustrated publications, most notably Harb Mecmuası, a periodical dedicated exclusively to the war. 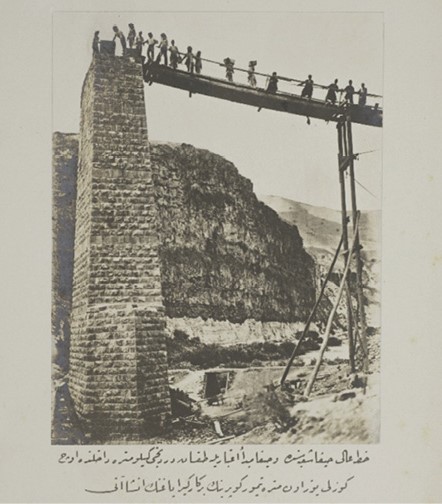