Turner (ed.): From the River to the Sea: Palestine and Israel in the Shadow of “Peace"

Turner (ed.): From the River to the Sea: Palestine and Israel in the Shadow of “Peace"
Author:
Maia Carter Hallward
Digital Section:
Reviews
Reviewed Book 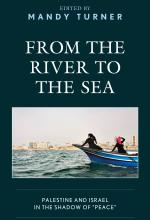 Mandy Turner
From the River to the Sea: Palestine and Israel in the Shadow of “Peace”
2019
-
English
Download
Full text:

From the River to the Sea examines the current context of various communities in Israel/Palestine more than twenty-five years after the Oslo Accords. While the contributors vary in their views regarding what the future holds for the region, they approach the topic as “an unjust and violent colonial situation that must be documented, opposed and resolved in a way that advances human dignity and rights” (p. x).

This is not an introductory-level text, but rather is aimed at those with basic knowledge about the region, given the authors' sophisticated arguments and detailed discussions that involve a range of political actors, agreements, and geographical contexts. In keeping with the principle that research can be “objective” but cannot be “neutral” (p. ix), the contributors in this volume critically examine the “victor's peace” that has resulted from the Oslo process. More specifically, the authors seek to transform international public perception of the situation through their scholarship (p. x).

The book's eleven chapters can be divided into three sections. The first four chapters provide a critical examination of the Oslo agreements and their consequences for Palestinians, with chapters that explore the impact of the Oslo Accords on local Palestinian politics and economy. The second section explores the unique challenges of various constituencies affected by the failed Oslo process, illustrating sociologist Jamil Hilal's observation that “each Palestinian community has found it necessary to tackle its own problems in the absence of overall national institutions representing the Palestinian collective” (p. 54). Interestingly, the first chapter in this section, titled “Politics of Exclusion of Palestinians in Israel since Oslo: Between the Local and the National,” focuses on the distinct challenges of the Palestinian minority within Israel; and the second, “A New Nationalistic Political Grammar: Jewish-Israeli Society 25 Years after Oslo” discusses the rise of hawkish politics within Israel. The inclusion of these chapters underscores the interrelatedness of the various populations living between the river and the sea even though, as aptly demonstrated by the chapters in this volume, the Oslo framework sought to fragment and divide them. Such political and discursive divisions allow for the dehumanization of the Other, and as linguist Yonatan Mendel suggests, provide justification for the occupation in the eyes of Israelis, portraying Israeli military and settler violence always as a “response” to Palestinian violence (p. 164). Chapters on the Gaza Strip, occupied East Jerusalem, and Palestinian refugees in Jordan round out the section.

The selection of these various population groups as the basis of chapters is unconventional in comparison to many compilations about Israel/Palestine, given that it brings together groups commonly considered distinct. Refugees and Palestinian citizens of Israel, for instance, lie outside of the typical geographic focus of the West Bank and Gaza Strip, and the discussion of those living in occupied East Jerusalem underscores the uniquely precarious position of a population that has no governing body looking out for its interests, as it lies outside of the Palestinian Authority's jurisdiction, and is excluded from Israeli governance as well. Although they pay taxes to the Jerusalem municipality, the city does not provide Palestinian residents with adequate services, and fifty years after Israel's annexation, there is no municipal plan for the eastern portion of the city, thereby preventing Palestinian construction and economic development.

Although no chapter explicitly documents the experiences of Palestinians in the West Bank outside of East Jerusalem, their situation is implicitly discussed throughout the book, such as with Diana Buttu's discussion of the various elements of the Oslo Accords, or Mandy Turner's reporting on increasing donor activity in the areas of the West Bank deemed “Area C” in recent years. Further, many reports on Palestinians over the past twenty-five years have perhaps unduly focused on the West Bank, particularly urban centers such as Ramallah, to the exclusion of other portions of the population. However, the book might benefit from a chapter that contrasts the “Ramallah bubble” with the experiences of other Palestinian communities in the West Bank, such as Hebron, Nablus, Bethlehem, and Jenin. Similarly, there is no chapter documenting more rural agricultural communities of Palestine or those Israelis living in West Bank settlements.

The third section of the book, comprised of chapters ten and eleven, asks, if the Oslo process has failed to bring “peace,” what is “Plan B”? In a series of interviews with Western donor representatives, Turner concludes that the international community has no “Plan B,” which results in a continual push for resurrecting what is seen as a dead process. Even as governments maintain their “Plan A” policies, Turner demonstrates that representatives on the ground often question this mandate, particularly in Area C, the territorial majority and predominantly agricultural portion of the West Bank where Israel maintains full military control, under the auspices of international humanitarian law. While “Western donors and multilaterals have therefore assisted in creating a colonial peace by supporting the persistence of a peace accord and framework that has allowed Israel to control Palestinians while continuing to grab land and expand settlements” (p. 274), in-country representatives have also tried to offset this through providing aid to local municipalities, working in East Jerusalem, and providing development support in Area C (p. 288). While donors may have no “Plan B” to the two-state solution, a single binational state is sometimes offered as an alternative. In a review of the single-state solution, Cherine Hussein finds that while it has some support, particularly within the Palestinian diaspora community, it has not succeeded in galvanizing a grassroots popular resistance movement (p. 324). Further, the one-state solution is challenged by the uneven power relations between Palestinians and Israelis as well as inequality and racism inside 1948 Israel.

All together the chapters in this volume provide a critical analysis of the failures of the Oslo agreements, tracing out the policies, discourses, economic frameworks, and power structures that have contributed to the existing political stalemate. The authors, who are primarily based in Europe or Israel/Palestine, challenge conventional discourse on the situation found in the United States, asking “how [it is possible] to liberate Palestine from the violence of Israeli settler colonialism” (p. 12), interrogating the enabling role of Western donors and policymakers for the continuation of a status quo that sustains and creates inequality and oppression. While the authors do not point to a single path forward, they identify several key themes and issues that must be addressed in any sustainable resolution to the conflict, including the importance of human rights and justice for all people in the region.

Maia Carter Hallward is a professor of Middle East politics in the School of Conflict Management, Peacebuilding and Development at Kennesaw State University