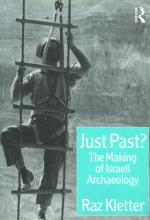 There are two kinds of books. On the one hand, there are those that enter the marketplace where the commodity and itsmessage are sold and purchased (largely unified, even globalized, in this neoliberal era), and thus lend themselves topopular or scholarly critique expressedthrough consumer responses ranging fromindifference to interest, praise, controversy and rejection. And there are books that remain in the stockrooms or on libraryshelves. (There is of course a third category, those which, despite their rarity, eventually find their way onto the bestseller list – onethinks here of Swann’s Way, which appearedin a very limited first run that Proust had tofinance himself.)

The volume by Raz Kletter, Just Past? The Making of Israeli Archaeology is a fiftypound sterling whitewash. I mention theprice first because it guarantees that it shallremain limited in circulation – with no redeeming technical embellishments such ashigh-quality photos – to university librariesand the like. Perhaps it is best that way, for

a truly commercial run of the volume would surely elicit a response one level higher(or lower) than this forcibly limited edition. There would be a political uproar among those Palestinian refugees living in the region or around the world, who have alwaysknown of the fate of their own villages, houses and mosques. And there would be an uproar within the scholarly community, because the ideological presuppositions, the methodological inadequacies and the political intent of the volume deconstructthemselves almost too readily, and thus command refutation.

And indeed, the author is conscious of this conundrum. He talks about the first generation of Israeli archaeologists working in the decade following the creation ofthe state. An employee of the Israel Antiquities Authority, he owes his superiors and the censor, who gave him clearance to publish a book that is nonetheless based, we are told, on materials readily available to the public. And the subject matter he is treating stops half a century ago, so as further to minimize risk-taking, since the details heuncovers relate to facts that are known and were readily bandied around by those whoperpetrated them like Moshe Dayan (“there is not a single [Jewish] settlement that wasnot established in the place of a former Arab village”). The book is intended to assert the primacy of pristine British archaeological ethics and the adherence of the Israeliprofession to them, by and large. The value system that looks up to and identifies with the model of the former colonial master for guidance is characteristic of a certainpost-independence national intelligentsia, particularly in the Israeli case where thecolonized people are still there, underfoot. One wonders if he has considered Britisharchaeology’s behaviour and values (viz. Lord Elgin and the Erechtheion’s stolen caryatid, or Howard Carter, who cut poor King Tut Ankh Amon into eighteen pieces after 3,000 years in order to get all the jewellery). But the details don’t seem to interest him; he is entranced with the symbol of the elevated, emphatically Europeanand most emphatically not Middle Eastern value system of the Israeli antiquities andarchaeological elite.

Nonetheless, and beneath the somewhat tedious and lengthy quotations, there appearsome interesting data, making this a primary source of sorts. There are documents relating to the Palestine Archaeological (“Rockefeller”) Museum (whose status is to be determined along with the rest of final status issues, which is a bit disconcertingconsidering the fact that the identical Palestinian team that brought us Oslo is backat work), and one infers something about the contradictions between the preservationof antiquities (which under British-based Israeli law include buildings erectedbefore 1700) and urban restoration or development, which should have but did notseek to preserve viable habitat. But the overriding intention is to clear the Israeliarchaeological profession of charges that they participated wholeheartedly, or even in any significant way, in the frenzy of destruction of Palestinian private, public and holy structures that began around 1948. Carefully, the author limits the period under review to the 1950s (a couple of years before, a couple after), and prudently stops well

short of the 1967 occupation of remaining rump-Palestine and other Arab lands, most notably the Syrian Golan Heights.

But Kletter goes further than that: while indicting certain military men for theirexcesses, he by and large exonerates Israel for acts which, he claims, were inevitable given the state of war and the material needs of the immigrants. Although he severely criticizes the politicization of works on archaeology, he does not hesitate to render judgment on the question of human, and therefore archaeological, intent. If we areto believe him, the massive destruction of Palestinian homes, monuments and placesof worship was a nearly accidental byproduct of violence after 1947. There was no intention of carrying out ethnic cleansing, just a few late isolated cases of it (p. 42).And if subsequently, the authorities proceeded to raze villages in their entirety, it was first because of “embarrassment” and later to hide the unsightly blight that mightdisturb tourists, notably along the road from the coast to Jerusalem. The old Arab city of Tiberias was razed, along with its mosques and synagogue. On the other hand, the Arab village of Bar’am, whose inhabitants never left the country, was entirely destroyed in order to “accentuate” the synagogue (p.61).

He cites various authors regarding volition or intent, selectively, and finds there was none. One of them is the ur-Benny Morris. But not the Benny Morris of 2004 (The Birth of the Palestinian Refugee Problem Revisited) who had meantime becomeunequivocal in judging that there had been an expulsion policy and, in his infamousHa’aretz interview in January of the same year, stated that Ben Gurion, who led that policy, had finally gotten cold feet and not finished the job and gotten rid of all Arabs from “the whole Land of Israel, as far as the Jordan River…”, as he should have.

Why is this important? First of all, because it addresses the question of credibilityregarding the work as a whole, and most particularly, the choice of archival documents. Historians (and this designation is not a corporate one; history todayworks through a multiplicity of media and sources: written, oral, pictorial, fictional,and so on) always choose carefully among available documents – so much so thatthere is some credibility to the slogan: “archives lie.” They lie at the source and they lie upon their publication. At the source because they are drafted and crafted by a certain class of people (consuls, ministers, civil servants and other members ofthe elite) and not the countless marginalized persons whose situation they purport to describe.1 And they lie by virtue of the criteria of selection employed by those intellectuals who choose, present and interpret them for the public. This is why a close critical reading of documents, as well as the concept of intersecting networks (“whosaid what, when and to whom?”), has become vital as a criterion for verification inthe social sciences. And when verifiable secondary sources are selected or distorted, it is a reasonable induction that the material as a whole will be as well. Circumstantial evidence is found in the author’s having presented the work to the censor for approval.

Kletter does one thing that is virtually incomprehensible, even in the light of hisclearly revealed partialities. He ‘outs’ a Palestinian victim of the Nakba, a former employee of the Mandatory Department of Antiquities, one who would be deemed a collaborator in later periods, showing him as he pleads unsuccessfully for three yearsfrom exile in Libya to be allowed to return, expressing joy at the name ‘Palestine’having been replaced by Israel, denouncing (by name) those who had resisted theZionists, and who might possibly still have been in the country. The choice of documents here is baffling; the effect, chilling.

The other remarkable aspect of this work is that it behaves as though Edward Saidhad never been, and Orientalist versions of history were not reserved to fanatics in theBernard Lewis mould. We learn that Ottoman Palestine and by extension, the Ottoman Empire, was a place replete with “dark spots: ethnic groups were segregated; the bulkof archaeological research was carried out by foreigners; the Law of Antiquities was accomplished at the price of creating legal trade in antiquities... and each separategroup was interested in ‘our past’…” (p. 295). The most casual amateur can spot the enormities in this paragraph (with the likes of which the book is peppered),from the choice of vocabulary (“dark spots”) to the counter-verities regarding ethnic segregation, the hegemony of foreigners, the money-grubbing Turks, the ubiquity of Zionist-type solipsism.

A number of subjects are broached that might, if given some depth, have added to one’s understanding of specific issues. We find out how today’s Israel Museum in Jerusalem was originally financed (by US funds). But the story of the funds’disbursement is treated as a local scandal instead of being used, as it might, tobolster the literature on the history and teleology of museums in general (“followthe money!”). For this reason, it would not be correct to say that this book has noplace – it does, in those libraries that can afford it. And it can there be regarded and employed as a primary source, since it quotes a large if select number of documents of various types, pertinent to the study of the history of the land, its native inhabitants,and those who moved in to take their place. Because of the period it chooses to cover, it avoids the pitfalls of having to qualify Israeli archaeology as a tool of the regionallyexpanding state in the way Meron Benvenisti,2 Denys Pringle3 and most of all, Nadia Abu El-Haj have done. Kletter’s treatment of his much-respected archaeological caste becomes more problematic as the years go by, since it is hard to blame others for the depredation, as he does for this early period (he accuses the Israeli military and,believe it or not, the Palestinian victims of the Nakba). How would he qualify theirunequivocal involvement in settlement activities in these new territories, minus thefig-leaf of a recent European extermination campaign and hostile Arab armies and populations?

Kletter’s big problem, hidden amongst the many citations of sources, is Nadia Abu El-Haj, whose comprehensive study of a century of Zionist archaeology Facts on the Ground (Chicago, 2001) has become a major source on this subject. Throughout the book, he belittles and distorts her work in bolstering his own allegations, or ignoresit. But finally his animus breaks out and he lays into her, briefly but vehemently. While trying not to assault her in the total, American way, as an ignorant anti-Semite, he scolds her for her criticism of ‘Hebrew’ and Israeli archaeologists. Furthermore, she says nothing that Israelis have not been saying for some time (but to each otherin Hebrew, according to the cited work), and of course, she did not do what Kletter shines at, blame the victims (“Those who lost the names also bear responsibility” –p.218).

The whitewash, in the face of all the damage that we are told was done (but theplethora of direct oral history accounts of inhabitants and their transmission byhistorians such as Elias Sanbar and Walid Khalidi, or novelists such as Elias Khoury had long since told the story in its chilling plenitude) is based on the fact that‘everybody’ does the same thing, thus creating a blank slate on which subsequently to etch the new nation’s imprint. One example Kletter gives is that of Turkey and its wholesale destruction of the multicultural Anatolian past. And of course, he has a point: Turkey perpetrated genocide, at the very least on its Armenian population; Israel limited itself to ethnocide.

Roger Heacock is a historian who teaches at Birzeit University.

1 As shown for example by Ranajit Guha, “The Prose of Counter-Insurgency,” Subaltern Studies 2 (1983) 1-43.
2 Meron Benvenisti, Sacred Landscape: The Buried History of the Holy Land Since 1848 (Berkeley, 2000).
3 A research professor in archaeology, Pringle has completed three of the four volumes containing the complete corpus of crusader religious and secular buildingsin Palestine;he told me that he had to work as quickly as possible, because too many of these unprotected sites were continually being razed and transformed into parking lots.