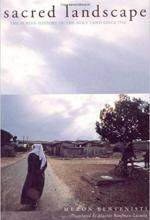 Israeli Zionist intellectuals who are located on the most leftist pole of the political spectrum continue to produce bizarre books navigating carefully between self-criticism and justifications. This is an intriguing genre, characterized by careful deconstruction of the Zionist past and present, which was recently exposed to its widest audience in the treatment of history in the Israeli television series "Tekumma"--yet another intellectual exercise of self-criticism without violating the basic Zionist consensus. Meron Benvenisti's book is very much in this vein. These books are very informative and full of intriguing facts about callous Israeli behavior in the past, but they are wrapped in Zionist ideology that leaves the question of Israel's moral responsibility intact. Morality should be an integral part of historical research, but it is not in these books in general, nor is it to be found in the book under review. Nevertheless, Benvenisti's book is somewhat exceptional in this respect because he does not pretend to write a purely scholarly work. He is a journalist and writes like one. Therefore, this is an opinionated book with a clear, undisguised ideological agenda. This transparency makes it a bit easier to examine the connection between what happened, the author's interpretation, and the moral and political conclusions driven from the historical analysis.
On the factual level, readers will find much in this work that is novel. The book in essence looks at the way the Israelis transformed the "human geography" of Palestine after the 1948 Nakba. It examines in a detailed manner the renaming of the land and its human sites as part of the antirepatriation policy that Israel adopted after the war. Benvenisti is one of the few Israelis who dare to describe the policy that was pursued as "ethnic cleansing." According to this book, the "ethnic cleansing included Hebrewizing [sic] Arab names, the building of Jewish settlements over deserted Arab villages, and the refusal to allow a collective return." The worst episode in this operation was what the author calls "the atrocities." These included massacres, rapes, and expulsions of Palestinians, but, according to this book, these "atrocities" were few in numbers and limited to the last phases of the war, around October 1948.
At this point the readers will get the impression that this is an explicit challenge not only to mainstream Israeli historiography, but even to "new historians" such as Benny Morris. But it is not. Admittedly, the term "ethnic cleansing" is provocative from a Zionist point of view, but its explication in this book would lead the average Zionist reader to exhale a sigh of relief. According to Benvenisti's narrative, the cleansing was not premeditated, the indigenous population left and was not expelled, and atrocities were on the level one would expect from a "modern" nation in a conventional war. The worst part of the narrative is the takeover of the abandoned villages and their resettlement by Jews. Indeed, if there are no war crimes and the "ethnic cleansing" amounts to the renaming and resettling of uninhabited villages, then the Israeli conduct sounds less ignominious in retrospect.
The Nakba is presented here as loss of land and houses. Nothing is mentioned about careers, normal life, cultural production--in short, the brutal termination of human existence in one's own land. The limits of the soul searching in this book emerge starkly when one reads the author's political conclusions today in light of his version of the "ethnic cleansing" of yesterday. The answer to the question Quo vadis? is quite short: "What was lost needs a tombstone." This is a distorted paraphrasing of a piece written by Azmi Bishara and adopted wrongly by Benvenisti as the end of the story. Bishara wants a tomb on the way to repatriation; Benvenisti wishes for a tomb instead of repatriation.
After reading the book, one gets the impression the Nakba was a nonevent. Benvenisti would have been perfectly right if all that had happened in Palestine was destruction of villages and urban centers in the aftermath of the war as part of an Israeli antirepatriation policy. His remorse then would be respectful and his call for forgetfulness reasonable. But the destruction of the deserted villages pales in comparison to the real "ethnic cleansing" not mentioned in even one word of this book. This is the vision that Nur Masalha describes in his recent book Imperial Israel. The destruction of deserted, uninhabited villages was a final act in a plot written in the 1880s. Zionist ideology purported and advocated the depopulation of Palestine. The contingency that developed in 1948 enabled this movement to implement this old desire to cleanse the indigenous population. Such heinous ideas could have been legitimized in the eyes of liberal-minded Europeans, such as the early Zionists, since this was the age of colonialism, when genocide and ethnic cleansing were part of the legitimate means for expanding European power into Asia and Africa. The rise of the European Left in the 1920s and the decline of the colonial powers after World War I almost brought to a stop these acts of depopulation. Zionism was lagging behind because it had to wait until it had the power to act, and it could not have done so before 1948. It also would not have escaped the wrath of the international community had it not been for the Holocaust. These last sentences, if accepted as reasonable analysis of historical development, exclude their author from the Zionist consensus. Benvenisti chooses to stay within it. To his credit, one should say that he does not hide behind scientific truth to claim the rightness of his position. It is difficult for him emotionally to cross over to the non-Zionist bank of the river.

--------------
Ilan Pappé is professor of political science at Haifa University and academic head of the Institute for Peace Research, Givat Haviva.